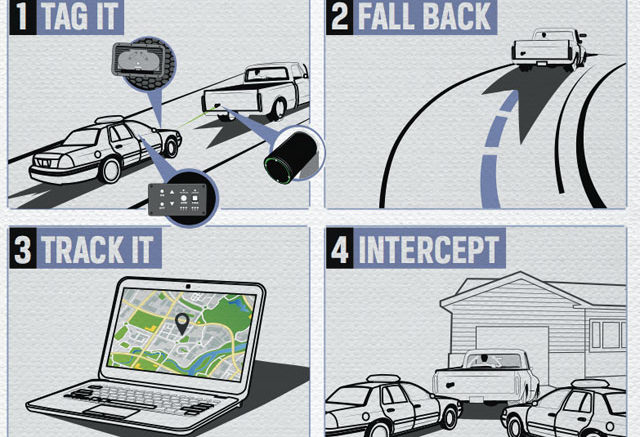 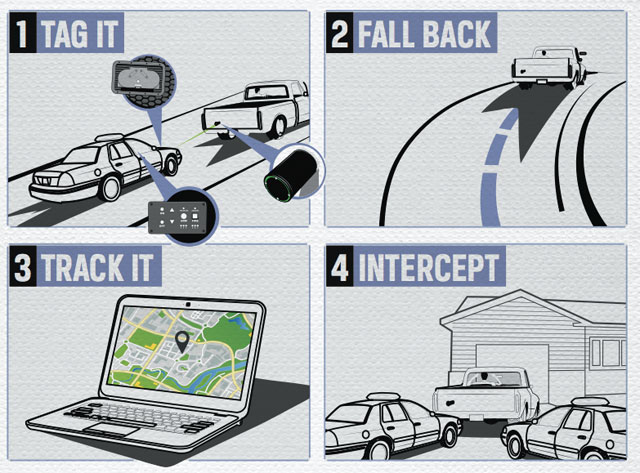 There’s an undeniable danger for all drivers on the road (and pedestrians too) when a high-speed car chase ensues. Outside of letting the criminal go, which police sometimes do for the safety of the other motorists, there haven’t been many options to safely catch a criminal behind the wheel of a vehicle if he decides to take off, until now…GPS tagging for people who ditch the cops is now being used in select cities around the US.

But will this approach stand up to current laws?

Across the country, officers are now able to discreetly shoot a GPS tag onto a vehicle that’s on the run. With the information fed to police from the GPS unit, the whereabouts of the suspect are mapped so the cops can attempt to cut them off at their next pass, follow them to their destination, or just stay nearby without the suspect knowing.

The device used to deploy the tag is a double-barreled air compressed unit that installs into the grille of the police car. When the officer gets ready to pursue a suspect, he or she will then activate the launcher mounted to the grill of the police car, using laser guides to target the vehicle and place the GPS.

Once in place, the module feeds information about the vehicle’s location and path to the police dispatch. This allows the department to come up with a plan to catch the criminal without engaging in a high-speed chase on public roadways. It can also take away the need for a suspect to be speeding away if he thinks he is not being pursued by patrol cars around, likely leading the suspect to return to normal speeds or even stop somewhere.

So far, the technology has supposedly worked in catching criminals and putting them in jail. Agencies are also reporting that officers are able to focus better on a safer plan to apprehend the suspect and seem to experience less stress doing things this way. The tracking evidence can also be used in court cases.

It’s not an uncommon though for law enforcement equipment to be a point of controversy.

Take the intersection cameras for instance — a piece of equipment meant to lower the instances of people running red lights but which are now known to cause more problems than they solve in some instances. While people are still running red lights, the increase in rear end collisions and traffic congestion is said to be up because of these camera.

But there are greater concerns, such as the legality of the use of this technology.

A recent ruling in U.S. v. Katzen, a slap-on magnetic GPS device was attached to a car to track a trio of brothers suspected of pharmaceutical robberies in New Jersey, Maryland and Pennsylvania. The police did not obtain a warrant for the device and used evidence from the device to track the vehicle to a recently burglarized RiteAid, whereupon they searched the car and allegedly found items from the RiteAid.

“A GPS search,” the court found, “extends the police intrusion well past the time it would normally take officers to enter a target vehicle and locate, extract, or examine the then-existing evidence.”

The Katzen case expanded upon a recent Supreme Court case on GPS tracking, U.S. v. Jones. In that case, the court decided that “attaching a GPS device to a target car constituted a physical intrusion upon the vehicle owner’s private property.” The court, while ruling that GPS tracking constituted a search, did not address whether it’s reasonable to conduct such a search without a warrant.

All-in-all, the technology, in theory, can do more good than bad, but only time and widespread use will reveal its effectiveness and accuracy.