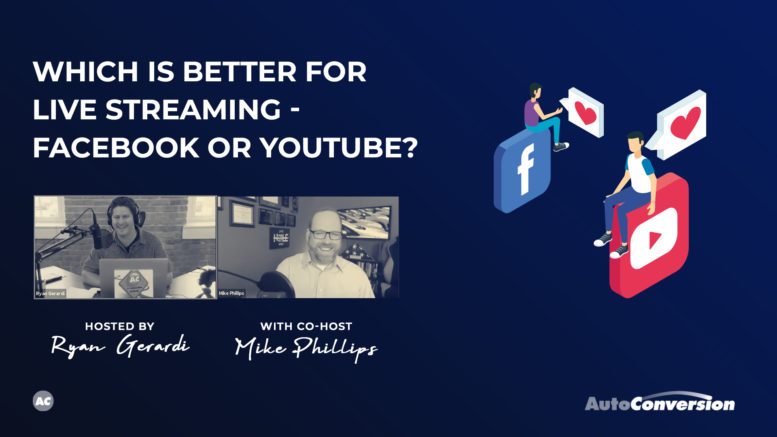 One could argue that the practice of live video streaming for business purposes is hitting critical mass in 2018. Many people have begun picking up the sport and are navigating their way through it. And there is a lot to navigate.

What benefit is there to streaming live as opposed to uploading an already produced video? How much planning and preparation are involved? What type of equipment do you need? Which platform is best for your live streaming endeavors? And do you even need to be live streaming in the first place?

To talk about these things, my good colleague – Mike Phillips and I got together for a little pow-wow. And we did it via live stream, on my live weekly broadcast – AutoConverse ON AIR. You can listen to the conversation right now while reading this. Press the play button above. It’s a GREAT CONVERSATION!

Live video streaming technology has been around for a while. I recall first experimenting with it in 2011 when Google introduced Hangouts On Air, which integrated with YouTube. After about a year I got away from those experiments, until around 2015. That’s about when Twitter introduced Periscope. And then there was Blab, which was sunset shortly afterwards.

In 2015, Facebook began making live streaming available to some of its higher profile users, and by 2017 Facebook Live was available for all users and businesses. Of course, this has much to do with live streaming reaching ‘critical mass’ this year.

The short answer is that it depends. It depends on you, your why, and your audience.

Mike Phillips is a Digital Strategist. He does a live streaming show two times a week called The Front; where he interviews people in sales and leadership roles. He also does a daily live stream called Morning Verses with Mike.

For Mike, he streams live simultaneously to both Facebook and YouTube. This is easier said than done, and it requires special software. Which is what makes Mike an authority in the field of live streaming.

But let’s go beyond the platforms for a moment, and talk about the “why” and the audience.

Why Stream Live, and for Whom?

Phillips is also the General Sales Manager for an auto dealership in Colorado Springs, Colorado. With more than a decade in the business, Mike has seen how connecting with customers has changed.

He began working with Internet sales back in 2004 – pretty much prehistoric when it comes to how things have changed for online shopping. Being involved from such an early starting point has given Mike a better perspective. Not only on what works and what doesn’t, but how important the personal touch has become in today’s increasingly connected world.

Mike has also held the position of Secretary for the Better Business Bureau of Southern Colorado since 2016. Working with an organization dedicated to customer satisfaction and corporate accountability means Mike looks at technology such as live streaming video from both sides of the coin – giving customers engaging and informative content is beneficial, but only if you’re transparent, honest and reliable.

These are the principles that drive Mike to do his shows, via live stream, and on both Facebook and YouTube simultaneously – connection and transparency.

Jumping into live streaming means you’re jumping into an increasingly crowded space. There are a multitude of groups on Facebook that are leveraging live streaming. And YouTube, undisputedly the largest live video streaming platform, has yielded an entirely new profession for people – YouTubers as they are called: People who have mastered the online video platform to amass large enough audiences to attract advertisers, and earn themselves hundreds of thousands of dollars, if not millions.

Essentially it comes down to what your target audience on each platform expects, and then tailoring your content to fit into those expectations. Here are some things to consider:

The importance of these specific elements vary depending on the platform, as well as understanding the policies and rules regarding each. Then, of course, you have the idiosyncrasies of each platform – something Mike learned early on.

“I did a few shows pretty much as soon as I knew we were able to stream to YouTube,” he says.

The channel held all of his videos, but his enthusiasm led to problems when he went to tweak a few things. He learned the hard way how easy it was to lose those videos (and the importance of back-ups).

“I went in to make some changes,” he says, “but I accidentally deleted it and then I was unable to get it back.”

Setbacks aside, Mike has since become pretty savvy with both platforms. Today he’s involved with streaming and podcasts focused on both his professional and personal interests. Because of this, he seeks out fellow streamers and podcasters who share engaging and resourceful content. This helps Mike engage more effectively with his own audience. It also pushes him to improve his own content and help fellow podcasters do the same.

Mike agrees that preparation and consistency are vital elements, but he also stresses the importance of being genuine.

About AC ON AIR

AutoConverse ON AIR is a weekly show streamed live right here on AutoConversion where we explore people, ideas, and technologies that influence how we are connected and the way we get around. For more information about the show and how you can get involved, follow this link.