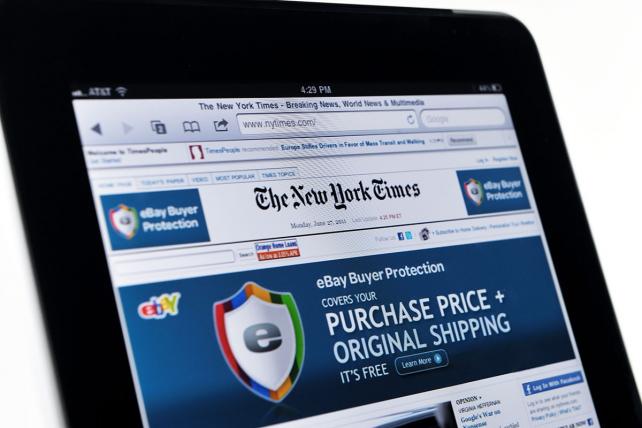 More than 40% of online ads are larger than industry standards, which slows down websites and annoys users with crawling load times, according to a report from Ad Lightning, which works with publishers to monitor ad speed.

Publishers like Business Insider have even begun telling advertisers that they can’t guarantee ads will be seen unless advertisers stay within the limits of acceptable data.

How big is too big? The Interactive Advertising Bureau sets a limit of 300 kilobytes for a display ad, and Ad Lightning found that 41% of ads it looked at across thousands of sites were larger than that.

Almost 10% of the ads exceed 5 megabytes, which is about the size of Shakespeare’s collected works.

Facebook is reportedly in talks with Major League Baseball (MLB) to license live games from the upcoming season for its recently announced video app. A successful deal would provide a high-profile boost for the offering, which will see the social platform make the move to Samsung Smart TVs, and set-top boxes such as Apple TV, and Amazon Fire TV.

The move mirrors rival Twitter’s live video strategy through its emphasis on sports broadcasts. Sports events made up 52 percent of the 600 hours of video content streamed on Twitter between September and December, and included major partners like the NFL and NBA.


How Media Startups Can Monetize Their Social Capital (Mediashift)

Social capital is a value that media entrepreneurs possess through their social, professional and business networks. It is also a value that they create through their work’s impact on society. Investors, the public and the media entrepreneurs themselves have tended to undervalue their work because it is hard to place a value on social capital. By contrast, it is easy to value a publication through the advertising and subscription revenue it generates and the capital assets it owns.

The French digital news startup Mediapart‘s five founders — well-known journalists from the venerable publications Le Monde and Libération — activated their social networks in 2007 to disprove a widely held belief at the time: that people would not pay for online investigative journalism.

The reputations of the founders and their networks were the social capital that attracted investment as well as a team of 25 reporters willing to take the risk on a venture many predicted would fail. The subscription-only digital publication now has 130,000 subscribers paying at least $120 a year.

De Correspondent, a Dutch-language online journalism platform, launched in the fall of 2013 after raising US$1.7 million from 19,000 people in what was then a world record in crowdfunding for a media organization.