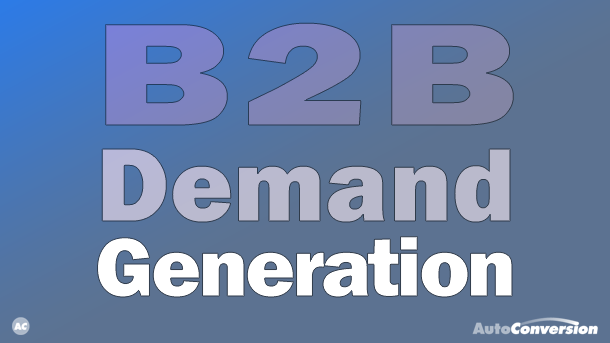 For the most part, B2B companies are faced with one of two scenarios when it comes to sales: Either they are new to the scene with no brand recognition, or they have brand recognition that needs to be built upon. Regardless of which side of the fence your company falls, the perpetual need to create demand will almost never subside. If you aren’t growing, you’re shrinking. Thus the continual need for demand generation.

The ideas behind demand generation are simple, and can be broken down into a simple 3-step process:

By beginning with the end goal in mind – RELATIONSHIPS, you can approach the first two phases knowing what the first two goals are. Relationships are built upon trust. You can’t establish trust if people don’t like you, and you can’t get people to like you if they don’t about you.

Let’s look at the numbers….

If you launch an ad campaign on LinkedIn that is seen by 1,000 targeted people, chances are that 100 or so may click on the ad. Of those that click on the ad and reach your landing page, normally 2-3% will convert on your website, but let’s say 5% to be generous. That’s about 5-10 people now from the original 1,000.

But what about the 990-plus people that didn’t convert? How many of them were actually somewhat interested in your message, but chose not to convert for whatever reason? Maybe there was a technical issue? Maybe they were in a rush? Maybe something didn’t vibe right with them? Practically speaking, the trust level wasn’t high enough for them to convert.

Regardless of the reason, some portion of those folks are still good prospects for you, even though they didn’t convert. You can’t control whether or not a person converts, but if you know who they are, then you can control what you’re going to do about it.

Here’s a tip…statistically speaking, a good 20-30% of the people that click on your ad and reach your landing page, are going to be relevant to your pipeline. Considering that no more than 5% can be expected to convert on their own, this means you’re leaving about 4-6 times the number of opportunities on the table by counting on people to convert.

In retail, it’s all about the online transaction, and online retailers have a lot of cool tricks up their sleeves to increase those online conversion rates. For B2B companies though, all it really takes is knowing who reached your ad or your site, and then taking swift action such as a phone call, an email, or connecting via social media, because by doing so you have a chance to establish trust.

From there, you can strike up a dialog and focus on building trust, because now they know who you are.

Get the Free Guide

Want to know who is interested in your message but not converting?

Download our free B2B Demand Generation Guide today simply by following this link. Look it over and write down any questions you have. Then, let us know if you’re interested in finding out how you can run content marketing campaigns that generate 3-5 times the number of leads you’ll get from a conventional funnel drip campaign you continually see ads about in social media.