For those of us that were kids in the 80’s, the name Mario has a particularly nostalgic meaning today as the game Super Marios Bros celebrates its 25th birthday today. For kicks, I did a little treasure hunting today and found some fun Mario treats.

Most people blogging about today’s milestone took a walk down memory lane with the character Mario. To be clear, Mario the character is more than 25 years old today. He was created by Shigeru Miyamoto who was hired by Nintendo in 1977 to design games.

Mario first appear in 1981 in the game Donkey Kong. In that game he was known as Jumpman, a carpenter at first. I remember being Jumpman, but didn’t really think much of him as I was too busy hurdling over barrels rolling down at me.

Mario then returned in 1982’s Donkey Kong 2. This time, as Mario the Plumber.

In 1983 Mario debuted in his own game Mario Bros where we were first introduced to little brother Luigi. Two years later came the game Super Marios Bros, which again celebrates its 25th year today.

You can read up on more historical facts about Mario at the Guardian, or other places around the web. There are some interesting videos out there too, historical and theatrical. Here is one I found to be informative, and funny as the narrator trips over some of words in the script. 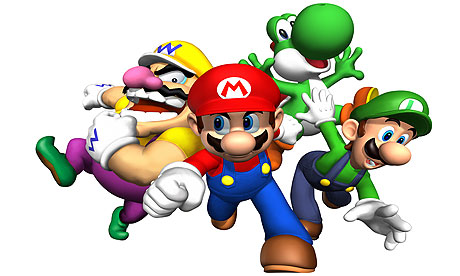 Mario has recently re-appeared in my life when my son, now 5, took an interest in the game Mario Bros last year. I introduced it to him at a website I used to frequent called Triplets and Us where the webmaster features links to just about every cool 80s arcade game that existed. My son loved it and eventually we had a Wii in our house where we now play Super Mario Bros Wii nearly every day it seems.

Interestingly, it’s still just as exciting and nerve-racking as the original. Unlike some of his other games designed for young children which I can’t keep enough attention span to play, Super Mario Bros Wii keeps me captivated.

I didn’t realize how popular Mario has remained through the years. The Super Mario Bros series is in the Guinness Book of Records as the most successful gaming franchise of all time. It now boasts global sales of over 240 million units and Mario has appeared in more than 200 video games.