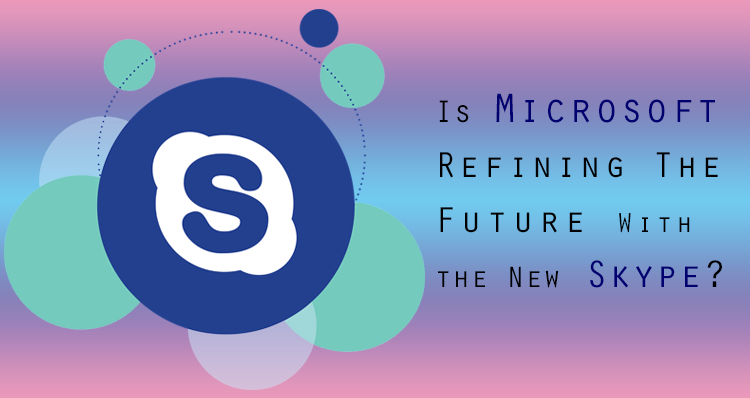 Microsoft recently announced plans to relaunch Skype with a new, hip user-interface, more options and the ability to share Highlights of your day. So are they just copying Snapchat or pushing the progress of chat clients?

Skype is a chat platform that has been around for nearly 15 years – making it positively ancient when it comes to online apps. When Skype was first introduced, it essentially created the VoIP (Voice Over Internet Protocol) – a fancy way of referring to Internet based calling.

When Skype first hit the scene they offered a way to talk online, essentially circumventing the traditional phone systems. Back in 2003, cell phones weren’t as internet friendly as they are now and Skype released their own USB VoIP phones as part of their package. Users could plug in their phone and talk to anyone in the world for less than it cost to connect through the traditional phone system.

As time went on, VoIP and cell phone technology progressed well beyond Skype’s original services. As a result, plenty of people thought the messaging and chat program would eventually go the way of other peer to peer apps that fizzled and burned out (we’re looking at you, Kazaa, ICQ and AIM!)

But Skype simply expanded its offerings, improved its platform and continued to survive, if not flourish. But recently, Microsoft has made a move to change all that.

How Going Back to its Roots May Shape the Future

In a world where websites and apps want to become all things to all people, Skype is taking a different approach. Instead of expanding their services to try and give people everything they want, they’re narrowing their focus to make chatting and connecting online their top priority.

The newest version of Skype takes some of its cues from popular apps like Snapchat and Facebook Messenger. Their stylish new interface has clearly been created to appeal to younger users while still remaining simple and intuitive enough for older and long-time users. At the same time, they’ve introduced a new feature, called Highlights, which is similar to Stories offered through Snapchat.

But Skype isn’t just rebranding itself to fall into line with the current trends. Skype has doubled down on making it easier to share what you want with who you want. Users can create special groups they can communicate with easily. This makes it easy for users to control who sees their Highlights as well as streamlining communication with specific followers or connections without broadcasting everything to everyone all the time.

In addition to improving chat functions, Microsoft is also planning big changes for what people share while chatting. Video calls are slated to soon feature real-time animations and enhancements as well as the ability to play games or watch streaming video together. At the end of the say, Skype doesn’t just want to be the way you talk to someone, they want to be the way you hang out with them.

The Future is Being Refined

While some websites – and companies – are working to expand their offerings and services as a way to grow their customer base, Skype (and Microsoft) are taking the road less traveled – but one that could easily pay off.

By going back to Skype’s roots as the best way to organize communication in all its forms, the company looks like it will easily be able to hold onto its title and reputation for being the Go To communication platform. Their move also shows that companies that want to improve their reach and influence don’t always have to think bigger is better – sometimes narrowing your services and focusing on quality is the best way to grow.