This is truly hot off the presses. I mean literally, I just got it from our friends over at iPowow whose “in the now” technology literally turns fans into virtual judges, making participation TV a reality during a prime time telecast.

For the first time ever, the Miss Universe Organization and Dick Clark Productions will offer an on-screen interactive technology that will enable the home audience to ‘gamify’ their viewing experience as they watch the “2011 Miss USA® Pageant” LIVE from Planet Hollywood Resort & Casino in Las Vegas Sunday, June 19 (9 p.m. ET) on NBC.

The interactive technology I am referring to is iPowow, which we have blogged about in the past. The collaboration with iPowow takes fan involvement to a next level by allowing fans to role play along at home and be a part of the show as a ‘virtual judge.’ 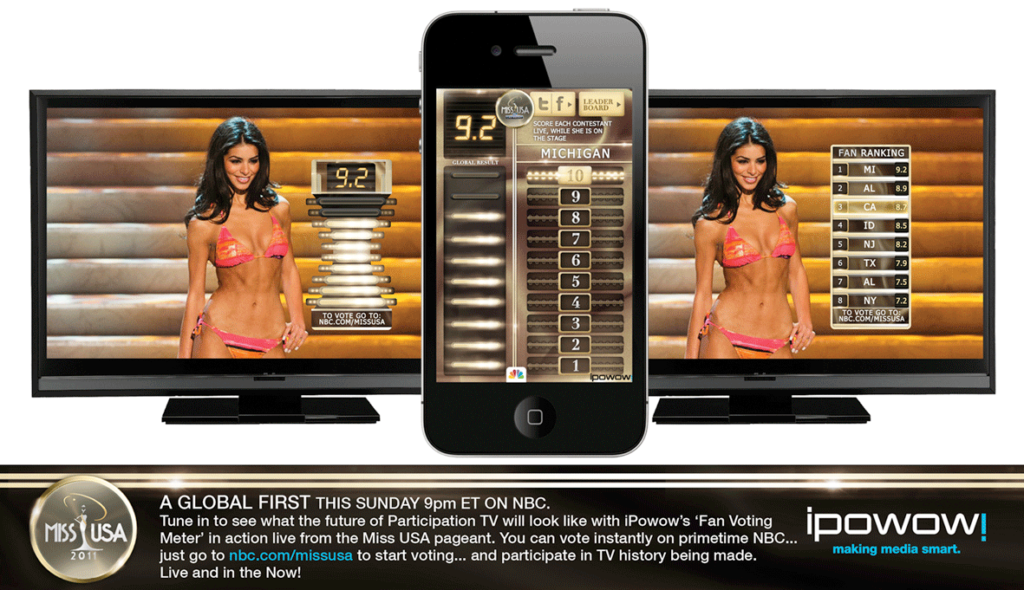 The web application is already available at www.nbc.com/missusa. Viewers can use iPowow’s Live-and-in-the-Now real time system from their smartphone, tablet or PC. After fans use the iPowow scoring screen to rank contestants during the live pageant, they will be able to share their responses via Twitter and Facebook. The show’s celebrity judges will ultimately decide who will be crowned the next Miss USA.

“iPowow’s engaging touch screen technology means our viewers will be an integral part of our live show,” said Colin Hornett, director, digital multimedia. “As viewers allocate points, a contestant’s on-screen score will update while they are still on stage. This is an incredible tool for fan engagement and not just a first for Miss USA, but a first for primetime event television.”

iPowow’s latest success with the 2011 MISS USA® Pageant comes on the back of collaborations with global sports broadcasters UFC, Top Rank Boxing and the “2010 American Music Awards®”.

This type of interactive technology is something you can expect to see in the years to come. It not only makes the real-time aspect of live events accessible to people all over the world via hand held and mobile devices, but also puts the influence factor into these peoples’ hands like never before.

If you are going to watch the Pageant then be sure to have  your mobile device ready.