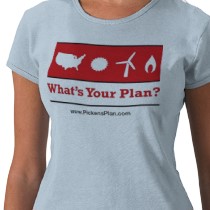 The PickensPlan, which is a true plan for energy independence in the USA, started in July 2008 during the Presidential race between Obama, McCain, and HRC. At the time, it was about using renewable wind energy as the bridge for making the US less dependent on foreign oil. About a year into this, the Plan shifted from using wind energy as the bridge and now natural gas is that stepping stone.

To give you an idea of how things were at the time, the US was consuming 21 million barrels per day (BPD), most of which is for transportation purposes. That is 25% of total global production of oil by only 4% of the world’s population. Of those 21M barrels, 13M are imported, 5M of which come from OPEC, which Pickens and many others have dutifully classified as OUR ENEMEY.

This month Pickens explains his plan to eliminate the 5M BPD from OPEC, first by targeting the 8 million 18-wheelers in the US to convert to natural gas (CNG) which would amount to 2.5M BPD. According to Pickens, this conversion could be accomplished in 7 years. Doing this would put Obama on schedule to “cut all imports of oil from the Mideast in 10 years”, a claim Obama made during his run for presidency.

All this is outlined on the 10:48 video below of T. Boone Pickens on his whiteboard, a follow-up to the day he got started in July 2008.

If you are reading this, take a moment to consider what’s in front of you. Here is a man, an oil man at that, who has essentially dedicated the rest of time here on earth to ensure America’s energy independence, something that US presidents dating back to the 70’s have promised and done nothing to achieve. Here is a man with a plan, something few politicians have and something oil companies are not going to do because the economics are not in it for them.

Case in point…1 mcf of natural gas costs $5 and provides the equivalent of 7 gallons of diesel which at $3 per galling is $21. That is FOUR TIMES the cost. Why would an oil company want that?

America’s energy independence is about social change. It’s about each of us as individuals taking the necessary steps towards our independence, much like what was done in the 1770’s for this great nation to get out from under British rule.

You can start today by signing up at PickensPlan.com and when you do, drop me a note on the site to let me know you did.