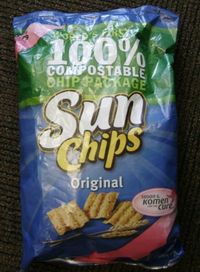 In the push for companies to be more “green”, Frito-Lay earlier this year introduced their new biodegradable bags for Sun Chips. The commercials were great and so too was the concept. Problem is, the bags were real noisy. I mean, real noisy.

According to sources, the biodegradable SunChip bag reaches up to 99 decibels.

Well, not any longer. Frito-Lay announced yesterday that it is going back to the original bag on all varieties except Original Flavor. Apparently, the company received a numerous complaints about the noise, primarily through social media sites riddled with mockery videos and people poking fun at the nuance, most significantly this Facebook page called SORRY BUT I CAN’T HEAR YOU OVER THE SUNCHIPS BAG.

According to sources cited by the WSJ, year-on-year sales of Sun Chips have decreased each month since January when the bag was first introduced. This would indicate that the noise is affecting sales, which I can actually attest to because just a couple weeks ago I changed my mind about buying a bag of Sun Chips, which I thoroughly enjoy, because of the noisy package.

It is likely Frito-Lay will pursue other options based on what I could gather, as opposed to re-introducing it another time. There surely are other alternatives out there for accomplishing this. A spokesman for the company was quoted saying, “We chose to respond to the consumer feedback but still want to show that we are committed” to compost capable packaging.