The subject line of this post is actually a quote from T. Boone Pickens, Texas oil man gone activist who started PickensPlan during the 2008 Presidential campaign.

PickensPlan, which we have written about on this blog multiple times, is the real deal. It’s an actual plan, devised by and funded by T. Boone himself, to get the U.S.A. off of foreign oil.

Initially this plan targeted wind power as a means for subsidizing our natural gas resources used primarily for non-transportation needs so that that natural gas could be freed up for use in transportation, reducing our dependence on foreign oil by about 30% over the next 10 years. Today the plan is concentrating almost entirely on natural gas.

Every President since Richard Nixon has promised to reduce our imports of foreign oil—none have accomplished it because they didn’t have a plan. We haven’t made any progress—our reliance on imported oil just keeps growing.

But now we have a plan. The bipartisan NAT GAS Act which is designed to create jobs, clean up the environment and improve our national security by incentivizing organizations that operate fleets of vehicles, including heavy duty trucks, that are fueled with imported oil to be replaced with vehicles that run on American natural gas. Check out Boone’s plan in this video where he spells it out on a whiteboard for you.

The PickensPlan website now has a petition form available online that people can fill out to call on all candidates for the U.S. House and Senate to make replacing OPEC oil with domestic fuels a central part of their campaigns. By signing this petition, you can help bring the U.S. a step closer to gaining independence with oil from foreign nations and our enemies. 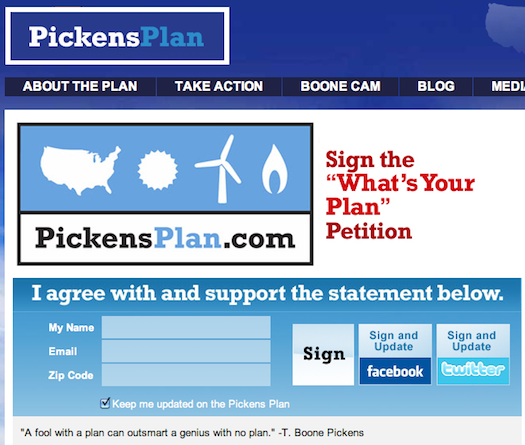 While there, take a moment to register with the PickensPlan website so you too can join the Army and take a stand for America. We do publish occasional updates like this to our blog and also on our Facebook page so if you prefer to keep us as your filter for the top-level opportunities and calls to action then subscribe to this blog and start following us on Facebook too.