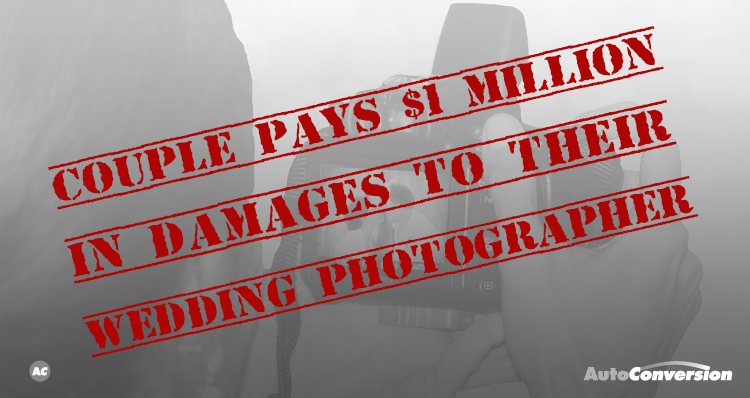 They say what comes around goes around and one couple in Texas learned that the hard way when a court ordered them to pay $1 million in damages to their wedding photographer. The case made headlines not only for its water cooler appeal but also because it shines a light on the reality of online reviews and the real world havoc people can wreak while curled up on their couch.

The wedding went off without a hitch

Andrew and Neely Moldovan had hired a local photographer to cover their wedding back in 2014. The photographer agreed and, according to both sides, the wedding itself went off without a hitch. But then, in 2015, the Moldovans began complaining that Andrea Polito, the photographer, was withholding their wedding photos over a $125 fee the couple claimed wasn’t part of their original agreement.

Over the next several months – and stretching into more than two years of a legal battle – the couple posted poor reviews via various websites, blasted Polito and her business through social media and even turned to local news broadcasts in order to make their complaints heard. Neely Moldovan was featured in local news reports as well as a story by the UK Daily Mail holding an empty box and telling a tale of a cruel, greedy photographer who was “holding [their] wedding photos hostage” over a fee.

The power of the internet and online reviews

It was a story that captured the attention of people all over the world. By now, people have become used to firing off angry reviews online, sharing their experiences and essentially using the power of the internet to sometimes force companies to do the right thing.

But in this case, the photographer held her ground and as the story was told and re-told a very different narrative began to emerge. It was this differing version that would eventually be what made this story truly something to notice and follow. It became a case that showed not only the power of online reviews but also the responsibility that power brings.

For awhile Andrea Polito remained tight lipped about the complaints and the ensuing legal actions that began to take place. She consistently maintained her innocence and as the Moldovans continued to share their story as publicly as possible, Polito did what she could to salvage her business and her reputation by ultimately deciding to take the couple to court.

The story Polito painted varied in some key details from the one the Moldovans had been spreading. Polito offered up email conversations which had clearly spelled out the final fee of $125 for the couple’s finished wedding album, as well as the original contract they signed agreeing to the price. She was also able to point to scathing, over the top reviews written by anonymous Facebook users with accounts that couldn’t be verified and which Polito said she had never done business with. She was also able to show that the reviews and story the Moldovans had been spreading did more damage than could be reasonably expected.

Not only did Polito end up losing her entire business, along with her savings and find her reputation in tatters; she also found herself on the receiving end of hate mail online and death threats that left her concerned for not only her own safety, but the safety of her family.

Evidence reveals the truth at court

When the saga finally made its way to court, jurors were privy to everything from the explanatory emails over the final $125 between Polito and Moldovan in early 2015 and well as social media posts and texts Neely Moldovan had written and sent during the time. In one text, she told a friend “We are hoping that our story makes the news and completely ruins her business.”

The verdict is reached

Once the jury had the story laid out for them, it didn’t take long to return their verdict. The jury found in favor of Polito and agreed that the Moldovans had set out on an aggressive and premeditated attack with the goal of ruining her business.

The Moldovans are expected to appeal the decision and have publicly claimed they never intended Polito or her business any true harm. Polito is less concerned about the monetary judgment for now and is focused on having her name finally cleared. “For two and a half years I walked around my daughter’s school feeling ashamed and embarrassed,” she said in a recent interview, “They know I’ve won now.”