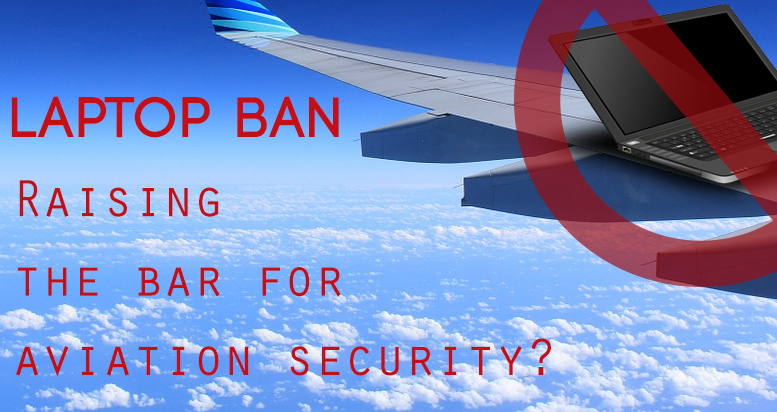 First they came for our liquids.  Then they came after our shoes.  But now they’re taking aim on our laptops, and people are not happy.

The Department of Homeland Security recently announced a laptop ban for international flights headed for the United States.  The ban currently only affects flights coming into the US from a handful of countries, including Egypt, Turkey, Qatar and the United Arab Emirates.  It bans any kind of electronic device larger than a smartphone, effectively banning all tablets, gaming systems and e-readers from the cabin.

Storing in checked luggage – Take the risk or stay on the safe side?

Banned electronics can be stored in checked luggage where it will be handled in the same manner all checked luggage is handled.  Given the fact that anyone who travels has a horror story involving the handling of checked luggage, plenty of air travelers are reluctant to check their laptops.

If the ban goes through, however, the only other option would be to leave the laptop at home after transferring any needed files to the cloud and then potentially renting or borrowing a laptop once you got to your destination.

At least one airline – Emirates – has already proposed a special VIP option for travelers who want their electronics to receive special handling.  They have also announced they will hand out Microsoft Surface tablets to some passengers so they can continue to work, although not on their own tablet or laptop.

Raising the bar for aviation security

Homeland Security Secretary John Kelly has not ruled out the possibility of the ban being put into effect for flights leaving the US or even for all international flights.  When asked about it on Fox News Sunday, Kelly said the ban “might” be expanded before going on to say that Homeland Security was planning to “raise the bar for … aviation security much higher than it is now” and hinted at the use of “new technologies down the road” though he did not offer any details on what that technology may be.

In the end, he defended the ban as well as the potential to expand it.  “There’s a real threat,” he said, “Numerous threats against aviation, that’s really the thing that they are obsessed with, the terrorists, the idea of knocking down an airplane in flight, particularly if it’s a U.S. carrier, particularly if it’s full of mostly U.S. folks.”

Laptops in the cargo – a fire hazard

Critics are quick to point out that banning laptops doesn’t offer any enhanced protection since a smartphone or smaller device could easily be used by terrorists.  They also contend that storing so many electronics which use lithium batteries in the cargo hold could actually be a fire hazard.

Is it really about safety?

International travelers are watching the fallout from the ban with great interest, even if they don’t fly into or out of the countries currently affected.  In a world where security has become increasingly far-reaching, there’s some concern the ban could be expanded.

Do you travel internationally for business?  How do you think the laptop ban would affect you?  Would the potential enhanced protection be worth the trade off?  Weigh in on the discussion in our comments section.