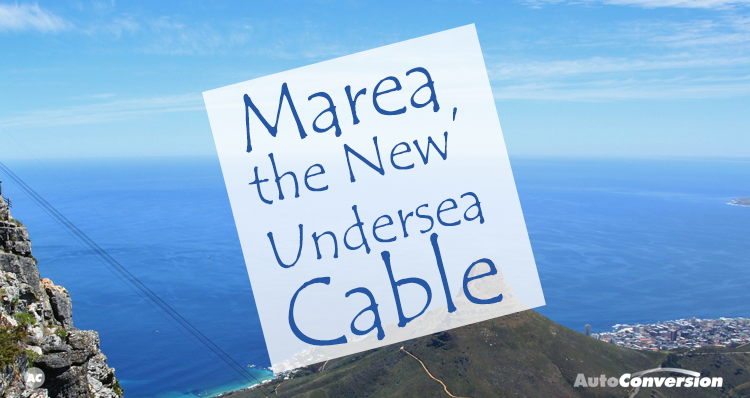 In 1858 the world’s first underwater telegraph line was completed along the bottom of the Atlantic Ocean. Nearly 160 years later, Microsoft, Facebook, and Telxius are working to complete a 4,000-mile subsea finer optic cable connecting Virginia and Bilbao, Spain.

The cable has been christened by Microsoft and Facebook as ‘Marea,’ which is Spanish for tide. It weighs more than 10 million pounds, stretching 4,000 miles or about as long as the Amazon River. In some places, the cable rests 17,000 feet below sea level and along the way, engineers have had to deal with landscape challenges such as volcanoes and earthquake zones.

A 160 terabyte per second capacity

As impressive as its physical characteristics are, its technology is notable as well. Microsoft dedicated an entire blog post to the project and hyped up the cable’s “open” design. The aim is for the new design to enable better upgrades now and in the future. It boasts a 160 terabyte per second capacity, which is roughly 16 million times faster than your home connection. 71 million different households could start binge-watching GoT, Breaking Bad or anything else at the same time and on a shared cable and Marea could handle the traffic without a glitch.

A set of challenging events during Marea project duration

But the catalyst for the project wasn’t spectacular television. The events surrounding Hurricane Sandy in 2012 drove home the importance of having a stable intercontinental connection. Flooding knocked out servers and cut off contact between North America and Europe. Not only did this make organizing supply efforts and directing aid more challenging, it also impacted the world economy.

The cable was completed in September of 2017 and is currently slated to begin operations in the first quarter of 2018. Given this year’s storm season, many experts agree it won’t be long before Marea gets its first test.