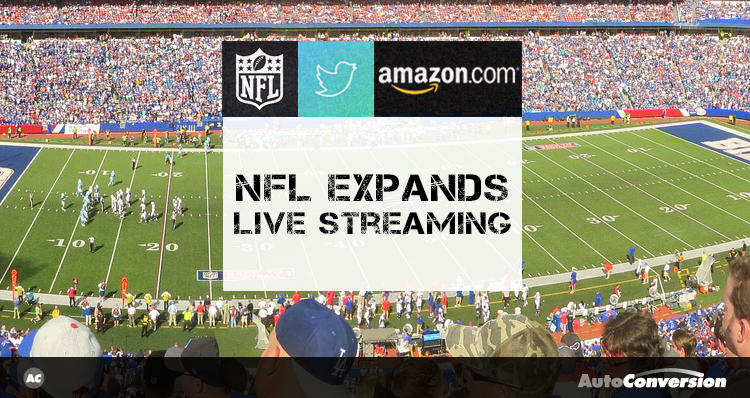 It’s been a big year for Amazon. The omnipresent retailer added Whole Foods to its impressive portfolio and became the world’s third-largest retailer – not a bad development for a company that spent more than a decade running in the red.

But if their foray into groceries had people thinking the company was working harder to become the world’s One Stop Shop for Everything, their recent move into live streaming will certainly seal the deal. This year, Amazon stepped in and scooped up a deal with NFL that left its competition with little else to do than talk about it after the fact.

In 2016, Twitter made headlines when it teamed up with the NFL in a deal to stream the Thursday Night NFL games throughout the 2016 season.

For the NFL it was a chance not only to reach people who might not maintain a full cable subscription, but also to connect with a younger, hipper audience.

For Twitter, it meant greater exposure to an audience who may not have used the platform before since it gave fans the ability to tweet in real time, during the game, with their own circle of friends as well as the entire Twitterverse.

Each outfit was able to reach a wider audience and fans were thrilled with the result. It seemed like a no-brainer that the arrangement would continue.

While Twitter may have been the innovator when it comes to new delivery systems for live games, Amazon was fairly quick to step in and take over. With the new season looming, Amazon wasted no time in securing the deal for the next season.

The deal between Twitter and the NFL had been valued at roughly $10 million – Amazon offered $50 million for the rights. At the same time, Twitter’s growth rate has remained stubbornly at zero while Amazon has celebrated impressive growth rates thanks, in large part, to its Prime Day sales initiatives.

At the end of the day, the NFL is still out to achieve its goals of growing their audience. They thought Twitter could deliver a broader audience with fresh faces and new takes on the game.

But, in the end, there simply isn’t a company that can compete with Amazon when it comes to reaching the public with consumable entertainment. No doubt Twitter fans will continue to tweet about NFL games as they’re played – but this year they’ll be talking about the games on Twitter while watching them on Amazon.