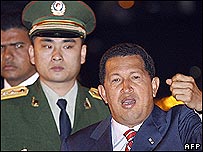 As somewhat of a doomsday-er I have to say that Google’s announcement this week about it’s new approach with China after determining that December’s security breach originated from China and with politically sensitive implications is a sign of things to come. For Google to come out swinging like this against the Chinese government shows just where Google sees itself in the global scheme of things. Question is, will it do any good?

It has been 4 years now since Google began producing search results for Chinese Internet users in the belief that “the benefits of increased access to information for people in China and a more open Internet outweighed our [their] discomfort in agreeing to censor some results.” While their stated interest may have seemed novel, what they got in return was a sharp knife in the back.

This has to suck for Google. They gave China an undeserving chance and once again China stabs you in the back and oversteps its bounds for its own national interest.

This is why we can not trust China. I don’t mean Chinese people, I mean the nation and government of China. While the U.S. is storming around deserts vainly trying to balance regions in religious strife and raveling ourselves into political handcuffs that will make it difficult and costly to benefit from for oil supply, China is sailing the seas cutting strategic energy deals with people and nations the U.S. doesn’t even do business.

When will we realize in this country that we are en route to being devoured by China who is already looking to begin supplying itself with manufactured goods it has always imported from us, secure its energy futures, and keep the lock down on political forces that breathe a hint of threat to its ideals.

What Google needs to be doing is to work with the global community on ways to incentify China to be a global player. Respecting China’s censorship demands clearly just leads to events such as this. China are the ones walking the fine line here and Google needs to keep it this way. With a belly of guts, Google should be able to use this opportunity to pressure China opening up to the world more appropriately, and if possible, Google also needs for China to acknowledge its role in this hack and concede to a hefty penalty.