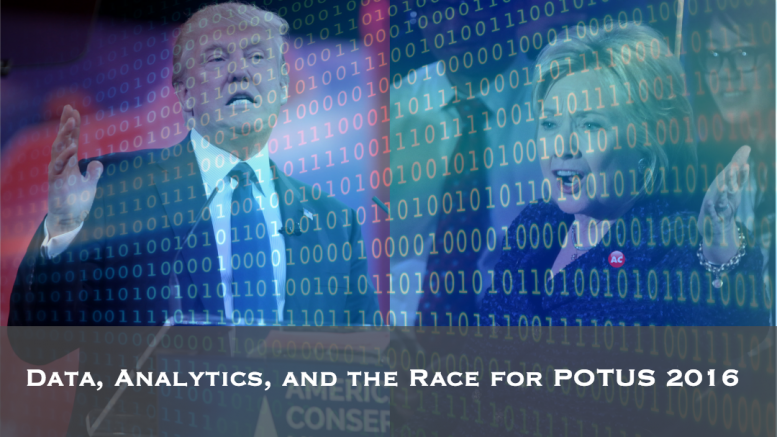 This year’s election has been a catalyst for conversations involving a number of technological issues. As we reported last month on Trump’s America First App, another telling story has been the use of data analytics within the Clinton campaign.

Refreshingly, this time there’s no scandal and no potentially damaging allegations – instead the story has been about how focused the Clinton camp has been – not only on the content of her message but in how, when and where that message is delivered.

Over the past few years, data analytics have been used to tailor advertising campaigns and even predict the actions of people using their social media and other online activities. In terms of the election, though, data analytics is giving Hillary a seemingly huge advantage – or is it?

Clinton has been criticized and even lampooned for her somewhat robotic nature – some say it’s that she’s become distant and cold as a result of being in politics for three decades, other say she’s simply not the warm and fuzzy type, but still others point to a little known department within her campaign organization – data analytics.

The team that works to compile, review and analyze voter data for Team Clinton consists of dozens of mathematicians and coders, headed up by Elan Kriegel. Kriegel has a long history of working with the data side of politics and the work he’s done with the Clinton campaign is likely to change the landscape of how politicians interact with their constituents for years to come. Their work is also making this election as much about the merits of data analytics as it is about party policy.

Critics claim that by relying too much on data analytics, Clinton sees voters as nothing more than pieces of data whereas previous politicians relied on making connections with people. Proponents of analytics point out it’s simply impossible to connect with all voters in a meaningful way and that using analytics is the best way to learn what voters truly want.

The Democratic party’s approach to data analytics has been all embracing. The team for Clinton – like the Obama team before them – has embraced every data stream possible in order to learn more about voters. Not only have they researched which messages will resonate best, but also when those messages should be delivered.

Her opponent on the other hand has dismissed data analytics claiming they are “overrated,” Trump says.

Could Trump’s approach may be the ultimate undoing for the GOP candidate? While many people are uncomfortable with how much information can be gathered using data analytics, the fact is, it does deliver the pulse of the nation to those most interested in knowing what people want to hear.

With the millions of dollars being used for analytics in the Clinton campaign, it does beg the question – will Clinton & Co be as eager to spend this kind of time, effort and money to use data analytics to form policy – or will it just have been a means to an end to capture the White House?

More importantly, should the outcome of this year’s election result in a Clinton victory, how much of a role can her campaign’s use of data analytics be attributed to the victory? Would a Clinton victory be the result of her use of data, or Trump’s inability to win voters because of his rhetoric?

Of course, a Trump victory would prove him right along, that using data analytics to form campaign rhetoric is overrated.