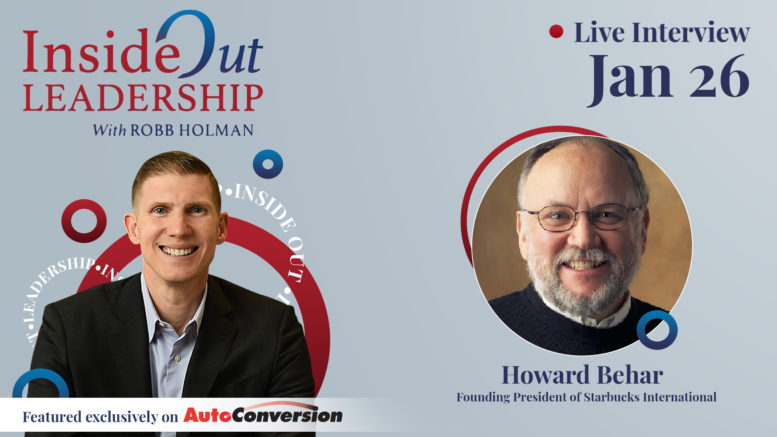 Hailed as a “hero of conscious capitalism,” “passionate advocate for leading with purpose,” and devoted student and teacher of the Servant Leadership Model, Howard Behar’s motivational message inspires everyone to be a servant leader and to lead with their values first.

Howard Behar’s career in business spans over 50 years, all in consumer oriented businesses, and most recently as a speaker, advisor, mentor, and bestselling author. His wisdom, generosity, and level of integrity have had a profound impact on thousands of people who have been touched by his example, books, and speaking.

Welcome to Inside Out Leadership with Robb Holman

Robb Holman is on a mission to interview 12 of the world’s greatest Inside Out Leaders over the next 12 months.

These transformational leaders are leaving an extraordinary mark within their sphere of influence resulting in transformational change. They have faithfully demonstrated inspiration, humility, courage, perseverance, and servant leadership!

Robb will be honing in on the inner work of each of these leaders individually and how that has contributed to their outer work of influence. The interviews will be recorded and then featured on Robb Holman’s Inside Out Leadership Podcast (coming soon).

During his tenure, Howard grew the coffee company from 28 stores to over 15,000 locations, and he’s the author of two books. – ‘It’s Not About The Coffee’ and ‘The Magic Cup.’

Behar is known for such memorable lessons as “The Person Who Sweeps the Floor Should Choose the Broom” and “Only the Truth Sounds Like the Truth.” For 21 years Behar led Starbuck’s domestic business as President of North America, and was the founding President of Starbucks International, opening the first store outside of North America in Japan. He served on the Starbucks Board of Directors for twelve years before retiring.
‍
The author of the classic It’s Not About the Coffee, a guide to leading by putting people first, and The Magic Cup, a parable about the power of personal values, he now travels the world speaking to leaders, organizations, and students.

Robb Holman is an internationally recognized leadership expert, executive coach, keynote speaker, podcast co-host, and bestselling author. Robb has a heart for authentic relationships and a talent for equipping professionals with the skills and knowledge needed for true success. You can visit Robb on the web by going to www.robbholman.com.

Robb is also an Affiliate Partner here at AutoConversion. Robb played a leading role and was an executive producer of White Collar Therapy & Leadership, which ran from September 2018 through late spring 2020. Robb is presently the face and leader of the Get Paid to Speak Bootcamp, a six-month course designed for those who want to get paid speaking gigs and make a career from it.