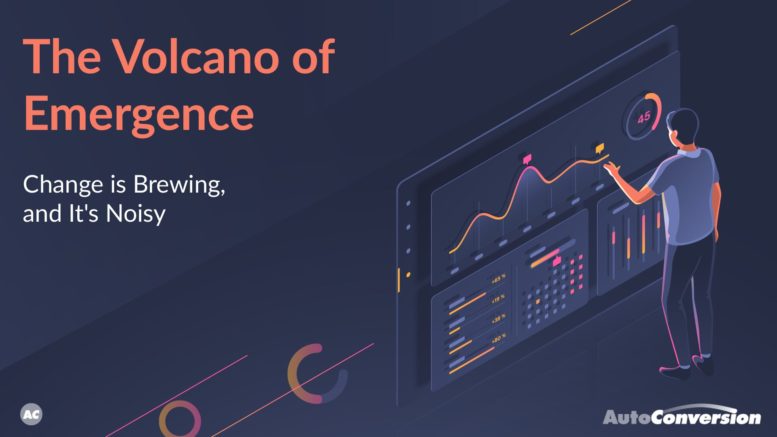 This is Part II of a 3-part series. For Part I, see The Underbelly of Convergence.

In the first part, we introduce Larry – a dealership employee who accidentally gets involved in the car business and rises up to near-stardom. But after a few years, Larry finds himself dealing with apathy, looking down and not up, unaware of the convergence unfolding before him and his colleagues.

As the 21st century entered into its second decade, Social Media had begun sowing the seeds for a new currency – data. Big Data. Remember that term? And with Big Data came Attribution. You know, that thing that helps everybody see and know their Return on Investment in advertising. And with Attribution came the death of leads, because now it was online engagement and VDP views that sold cars, not leads, those things once called “ups.”

All this data and all this attribution quickly became too much for the human brain to handle, and so we needed machines to help out. Thus the emergence of Artificial Intelligence and Machine Learning – two new buzzwords to help sell cars. Everyone was so relieved.

But Larry was ready to lose his mind. As far as he was concerned, nothing was changing. The industry was just throwing more data and technology into a system, a process really, where people buy cars from people. Larry’s dealership wasn’t selling more cars, more efficiently, and more profitably. If anything, it was the opposite. He was spending more time and money selling the same number of cars, less profitably.

You can imagine how excited Larry got when Digital Retailing came around. “Finally,” thought Larry, “a widget for my website referred to as a verb that was going to generate better leads and sell more cars.” What he especially liked was the promise that it would sell cars to people who don’t want to come into the dealership. This seemed like an ideal future for Larry.

By this time, Larry had lost touch with how it all began. He forgot why he got into the car business, and why he started blogging in the first place. And he saw no way out. Larry was in the car business for life as far as he was concerned.

Meanwhile, in other parts of the business, and in other industries, innovation was accelerating exponentially.

This was real innovation, Larry realized. This was exciting. It appeared like lava on his doorstep. Some posed no threat at all. But the emergence of all this real innovation got Larry’s blood boiling, in a good way. Larry began to feel alive again.

As the volcano of emergence fissured, pundits across the industry began to roar with rhetoric, speculation, and prophesy. Experts and thought leaders from all corners of the industry began crawling out of the woodwork, streaming live on Facebook, creating memes for their Facebook groups, starting podcasts, shows, and blogs. Suddenly, Larry realized, the volcano was erupting. And if Larry didn’t have a plan, he might very well be swallowed up into the pouring lava.

Come back next month for the third and final piece in this series – Where Are You in the Grand Convergence?