For the first time in it’s history, Mercedes-Benz USA will be advertising during Super Bowl XLV, and they’re using Twitter to do it. Understanding how important it is to tie customers and fans into its promotion, Mercedes-Benz has committed to use Social Media GIANT Twitter as it’s platform of choice for facilitating their Super Bowl XLV marketing campaign.

The best part? You can participate in what Mercedes-Benz is calling the first ever Twitter-Fueled Race! 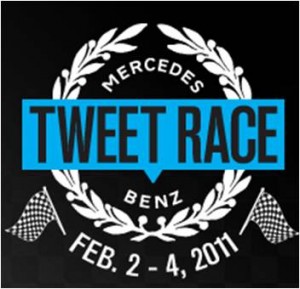 Here is how it’s going down…

According to a recent press release, beginning “on February 2 and converging on February 4 at Cowboys Stadium outside Dallas, Texas, four two-person driving teams behind the wheels of specially equipped 2011 Mercedes-Benz vehicles, each embarking separately from Chicago, Los Angeles, New York City, and Tampa,” will race to the Super Bowl for a chance to win a pair (one for each of the drivers) of all new 2012 Mercedes-Benz C-Class Coupes.

Mercedes-Benz is also getting celebrities involved as each team has been partnered with a Celebrity who will be soliciting tweet-fuel from Twitter followers in order to power his/her racing team AND to help generate money for charity. It’s never been done before, but really, what a great concept by Mercedes-Benz and Twitter!

During the 3-day Twitter Race each team will complete in a series of challenges, and with the help of their Twitter-savvy Team Coaches (ie. Celebrity team members), solicit as many tweets as possible for their team. Teams will earn points based on their completion of the challenges AND how many tweets they receive. The team with the most points at the end of the race WINS. Basically each team is assigned a hashtag and although information on the specifics are scarce at the moment, it appears that the way you support a team is to tweet as much as possible while appending your teams #Hashtag to each tweet.

Each of the four 2-person teams were selected to participate in the Mercedes-Benz Tweet Race based on the distinctive criteria that determined their influence as Twitterers.. Each team has been paired with a celebrity Twitter Coach to help garner support via Twitter. During the weeks leading up to the Super Bowl teams are soliciting your support.

Now, before you determine who you want to support, you must first meet the race teams. Each team is named after a Mercedes-Benz Model. The 4 race teams and their stories are below:

Now that we know the rules, and we know the players, it’s time to pick a Tweet Race Team to race with during Super Bowl XLV! To do this, we are using our new auto shopper social networking community AutoConverse.com to garner support for Team GL. Please visit our post over there titled, “Who do you support for the Mercedes-Benz Tweet Race?” to see how you can help support Team GL with us, or if you insist to support one of the other fine teams.

This is a highly creative Twitter Marketing idea from Mercedes-Benz. To date, nobody has run a Twitter promotion quite like this, so Mercedes-Benz is literally creating the blueprint. Not only are they pioneering this creative Twitter Marketing idea, but they are doing so in a very public fashion, during Super Bowl XLV of all things. Nobody knows if the Twitter promotion will work or if it will fall flat. We have a feeling though that it’s going to be highly engaging. Whether it fails or succeeds, Mercedes-Benz will learn a ton about their online community, and will receive loads of PR about their creative idea. We think it’s a win-win for Mercedes-Benz and we look forward to seeing how their Tweet Race goes.

You can get all of the latest updates about the Mercedes-Benz Tweet Race on the AutoConverse.com Facebook page, but stop by our Facebook page or leave your comments here to let us know what team you plan to support and what you think of this creative Twitter Marketing idea by Mercedes-Benz.