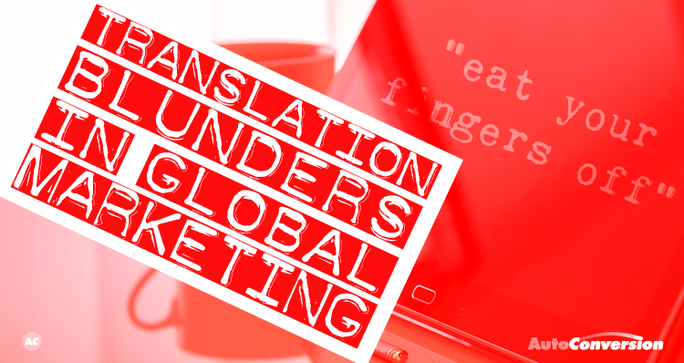 Operating in a global economy presents plenty of unique challenges. When working in different countries, it’s important to consider not only the local language but the culture as well. It’s a lesson that has been learned by many companies over the years.

When it comes to car companies, the trouble with translation has resulted in some absolutely epic marketing fails.

The Ford Pinto Peters Out

The Ford Pinto is a well-known car and one many Americans are familiar with, even for only the controversy that plagued the car at the end of its decade long run. It was a model that sold well for Ford throughout the 1970s. In South America, however, the launch of the car couldn’t even take-off.

Ford marketing executives had never thought about looking into whether or not the word Pinto might mean anything in other languages. When they released the car in Brazil, the public’s reaction killed the car before they rolled onto the lots. In Brazil, the word ‘pinto’ is slang for ‘small male genitals’. Somewhat ironically, in the end, controversy in the US concerned the car’s rear end as opposed to what was going on in front.

Mercedes-Benz had a similar experience when they entered the Chinese market. The luxury car company wanted to make their brand stand out from the crowd and so they shortened their name to fit in more with the Chinese dialect.

Or so they thought.

In the end, they settled on the name ‘Bensi’ which they felt was close enough to their full name while being short, catchy and easy to remember. They were right, but not in the way they had hoped.

In Chinese, the word ‘bensi’ means ‘rush to die’. Not exactly the message you want to send when you’re trying to sell them luxury priced automobiles. Mercedes-Benz was quick to rebrand themselves as Benchi which translate to ‘run quickly as flying’. Still not exactly poetry, but better than attaching your brand to imminent death.

When It’s Not the Translation, But the Spokesman

Sometimes the problem in communication on a global scale doesn’t have to do with the words companies choose but instead the person they choose to say them.

Fiat wanted to promote their luxury Lancia Delta car and wanted a spokesman who was suave, recognizable and had an established reputation. In the end, they chose to work with Richard Gere which seems like a great fit.

A series of ads was developed that showed Gere driving his Lancia Delta from Hollywood to the Potala Palace in Tibet. Once there. Gere exits his car and meets with a young child dressed as a monk. Together, the two begin to play in the snow outside and the ad cuts to the slogan “The power to be different.”

As the ad began to launch, however, Fiat executives quickly realized there was a problem.

The problem, such as it is, was that the campaign was launched in China. Gere is known as a superstar there just as he is here, but with one pretty big catch. Gere has been an outspoken and unapologetic support of the Dalai Lama and the Free Tibet movement. As a result, he is seen as a pariah by mainstream Chinese media and much of the public.

Couple that with the fact that the Potala Palace in Tibet is the former residence of the Dalai Lama, who was forced to flee in 1959 after a failed uprising to overthrow the Chinese occupation and you have a recipe for disaster.

Shortly after the ads began airing, Chinese viewers began posting online about how offended they were over the ads. Many vowed never to buy anything from Fiat and called for the company to formally apologize.

In the end, Fiat did issue a formal apology before pulling the ads.

The Nova Debacle That Never Was

If you’re waiting for us to also list the infamous account of Chevy’s Nova selling poorly in Spanish countries since it translates to ‘Doesn’t Go”, you’re out of luck.

It’s a classic story in the world of marketing. General Motors began selling their Chevy Nova model in Mexico and couldn’t understand why sales were so low. It was only then they realize ‘Nova’ in Spanish means ‘No Go’. They had to pull the car from the market and then re-release it under the name Caribe at which point sales took off.

The story has been quoted and cited by dozens of books, magazines and in conversations. It’s been passed down as one of the Golden Cautionary Tales of Marketing.

Turns out that’s an urban myth.

In truth, the Nova sold just fine in Spanish speaking countries. The Spanish for ‘no go’ or ‘doesn’t go’ is ‘no va’, not nova. This may seem like a small distinction at first. But believing that native Spanish speakers would confuse nova for no va is like thinking native English speakers would confuse a noteable person for someone who is literally not able to do something.

There was a car called the Caribe sold in Mexico, though. But it was manufactured by Volkswagen, not General Motors. In the US the same car was marketed as the Volkswagen Golf.