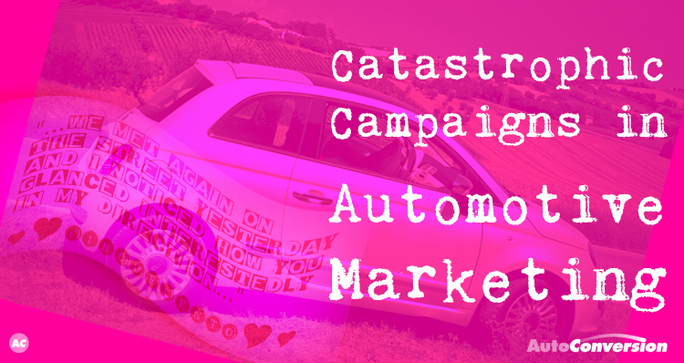 Marketing can be a rough game. An idea and delivery can seem so perfect in the moment, inspiring at the pitch, momentous as the campaign rolls out with high expectations … only to fall flat once the public gets their hands on it. In 2017, we saw plenty of marketing fails. From Kendall Jenner’s cringeworthy Pepsi commercial that was yanked less than 24 hours after its premier to the UK McDonald’s commercial that tried to sell a sandwich by exploiting a son’s grief, it’s been a year for noteworthy failures.

Each failure usually comes back to a lack of understanding when it comes to culture or social climate. In the Pepsi ad, executives simply didn’t think about how having a model sweep in and smooth over a protest would play in a culture consumed with serious political movements. These campaigns aren’t alone, though. In fact, the world of auto sales has had plenty of tone deaf failures over the years.

When Marketing Gets Creepy

In the mid 1990s, Fiat wanted to do something big to get some buzz going about the new Fiat Cinquecento. They worked with an agency that decided to send out anonymous letters to 50,000 women. the letters were personally addressed to each woman and began with a flurry of compliments. The letter invited each woman to have a “little adventure” after “we met again on the street yesterday and I noticed how you glanced interestedly in my direction.”

Local papers reported that many women felt threatened by the letter. Some women even chose to stay home for a few days, worried they were actually being stalked. Other women had awkward – and undoubtedly confusing – arguments with partners, boyfriends and husbands demanding to know who the Mysterious Man could be.

The mystery, of course, was resolved a few days later when the ad campaign went into Phase 2 which included sending another letter to each recipient identifying their ‘admirer’ as the new Fiat Cinquecento.

Fiat cancelled the campaign and apologized after widespread criticism from the public as well as Social Minister Cristina Alberdi and consumer protection advocates.

The Takeaway: Tailoring a campaign for a more personal feel can be a great way to engage with customers. But watch that your approach remains friendly, not creepy. You want their interest to be piqued, not their sense of danger.

Volvo Gets a Bit Over Confident

We live in a world where the proof is in the video. Car companies have used test drives and emerging technologies to wow customers for years. One of the biggest ways they can entice new customers is by showing off new safety features. In the 21st Century, that means demonstrations that are filmed for both the news outlets and to be shared via social media.

In 2010, Volvo was ready to unveil their newest technology. They had been working on a new crash detection and auto-braking system that could help prevent accidents even when the driver was unable to react in time. To show off their newest system, they called in some journalists and invited them to watch as a driverless S60 was accelerated toward a truck trailer. Worry not, said Volvo execs, the new system will kick in and the crash will be averted.

The car crashed right into the back of the trailer and the video went viral for all the wrong reasons. Volvo claimed later the problem came down to low battery power.

Four months later, Volvo decided to try it again with a pedestrian detection demo and experienced a similar failure. In the end, it would seem they decided to stop hosting unrehearsed demos.

The Takeaway: Public demonstrations for the press or live streamed on social media can be powerful marketing tools. That doesn’t mean it should be one of your early tests. Before demonstrating anything for the public, be sure you’ve tested it and rehearsed the demonstration internally.

Ford of India wanted to showcase the amount of trunk space in the hatchback Figo. What better way to do than show how many celebrities you can keep back there … right?

The ad campaign featured a series of cartoon celebrities, including Paris Hilton and the Kardashians, tied up in the back of the Ford Figo with the tagline “Leave Your Worries Behind.” One version of the ad even featured then Italian PM Silvio Berlusconi driving with three scantily clad women bound and gagged in the back.

Ford HQ stepped in, shut down the ad and immediately began issuing apologies.

The Takeaway: Edgy humor is a tricky marketing approach, and one that doesn’t often fare well with the public. But it’s also more likely to create viral content. After all, you WANT campaigns that get people talking. So how can you know when something goes too far? Before going forward with any campaign that could be interpreted as edgy, as yourself three questions:

Taking the time to consider and honestly address these three questions will give you a clearer perspective of the humor so you can decide if it’s a worthwhile campaign to pursue.

Chevy’s famous tagline ‘Like a Rock’ was one of their most successful ad campaigns, right alongside ‘Heartbeat of America’ and ‘See the USA in Your Chevrolet’. The Like a Rock campaign remains popular today thanks, in part, to the use of Bob Seger’s hit by the same name.

In 2000, Chevy decided they wanted to use the tagline to drive home just how safe and dependable their Blazer SUV was. They decided to display it as a life saver – something you can count on in a crisis. The campaign featured ads with Chevy Blazers hoisted up where lifeboats are normally stowed on larger cruise ships.

You can see the problem already, can’t you.

In the end, comparing a car to a llife boat doesn’t actually imbue the public with confidence or feelings of security. Especially when your tagline is ‘Like a Rock’.

The Takeaway: Clearly, the intent here was to play up the security and safety offered by the vehicle. But the comparison simply falls short. During the creative process it’s easy to lose sight of how a message will be interpreted by the public. get fresh eyes on new campaigns by asking people in unrelated departments or even a focus group so you can get a preview on how the public will react. 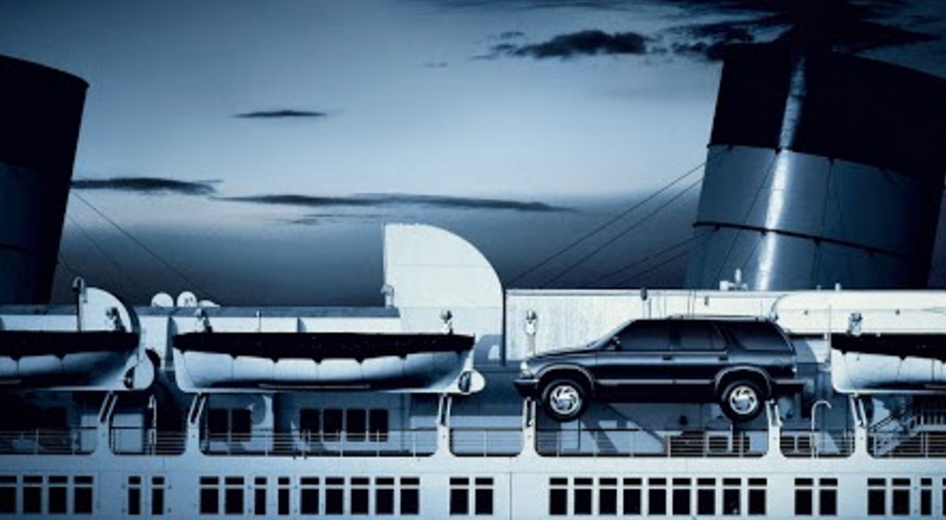 Back in the 80s, Ford launched their Aerostar minivan and decided to have some fun with the design of the van as well as its name. In the 80s, everyone was talking about NASA missions and looking towards the stars. So Ford decided to capitalize on the popularity and ordered a massive campaign that compared the Aerostar to the space shuttle.

This time, the marketing fail had nothing to do with the content, but with the timing.

The campaign was launched in 1986 … the same year as the Challenger explosion.

The Takeaway: Honestly, there isn’t much you can do when it comes to bad timing. But, if this should happen, it’s best to react with quick, decisive action. in this case, Chevy pulled all print and television ads right after the explosion and never revisited the campaign.

Death and Marketing – Usually NOT the Best Combination

Drivers are used to car companies bragging about their safety ratings but it’s usually in connection with how safe a car is likely to be in the event of a crash. So when Hyundai released a commercial in the UK hyping their low emissions as a safety measure things went a bit weird.

The ad featured a man getting into the IX35 crossover in a garage, rolling down the windows, starting the car and trying to kill himself. The attempt was unsuccessful, however, because the crossover didn’t produce enough toxic emissions.

After an immediate backlash the ad was pulled and Hyundai Motor Europe issued a statement that said, in part, “We understand that some people may have found the IX35 video offensive. […] We are very sorry if we have offended anyone. We have taken the video down and have no intention of using it in any of our advertising or marketing.”

Jalopnik, however, gave the ad the dubious title of ‘Worst Car Ad in History’.

The Takeaway: Exploiting human misery is rarely – if ever – a good idea when it comes to marketing your brand. Period.

Okay, so these aren’t exactly marketing fails, but they are well worth including here considering how vital social media has become to marketing. Car dealerships regularly engage with their local customers via various platforms, as do car manufacturers.

But if your company is going to engage with the public, you’d better watch those passwords. It was a lesson Chrysler learned in 2011 when the Chrysler Twitter account dropped an f-bomb about Detroit drivers. 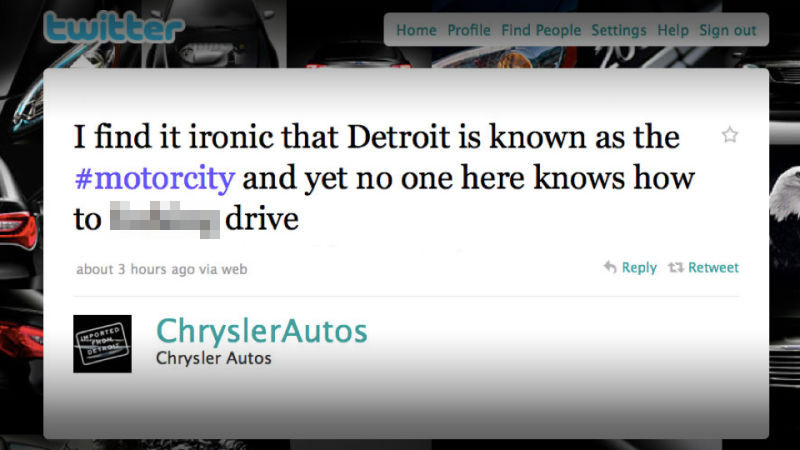 The company was quick to remove the offensive Tweet and claim a hacker had compromised their account.

In 2012, Dodge sent out a Tweet bragging about their Challenger with the tweet “Not even a #DodgeFan outlaw can out run this Challenger cop car.” The only problem? They used a picture of a customized BMW. 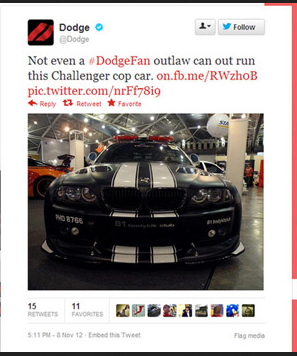 While these marketing fails offer plenty of fodder for schaudenfreuide, they’re also powerful learning opportunities. For every marketing fail, there’s a lesson in empathy, social conscience or simply the value of asking for an outsider’s opinion.