Ford made history on July 26, 2010 when it revealed the 2011 Ford Explorer exclusively on Facebook. The move scored big with online car shoppers in some astounding ways: 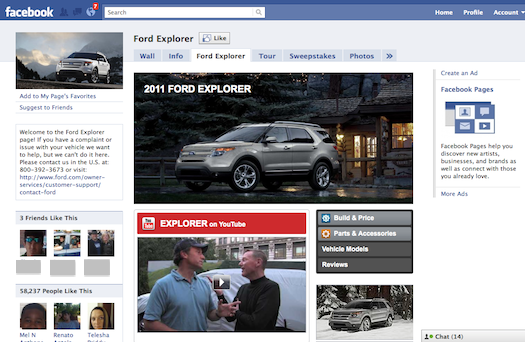 There are some fan-run pages out there so when you check this out take note of that. Fan-run pages are ok, but it would be a shame to think you found the official Ford Fan page when in truth you haven’t. The image to your right is from one of the stronger Fan-run pages. Below are links to other Ford and advertising activities and information.

Jumpstart Automotive Group is a leading representative of in-market automotive publishers with the most highly engaged audience of online car shoppers. Founded in 2001, Jumpstart Automotive Group capitalized on the massive shift taking place in advertising — the move of ad spending from traditional to interactive advertising. With online advertising expected to be a $42 billion industry by 2013, Jumpstart is leading the way, growing exponentially each year to a nearly 1000% increase in revenue since our founding.