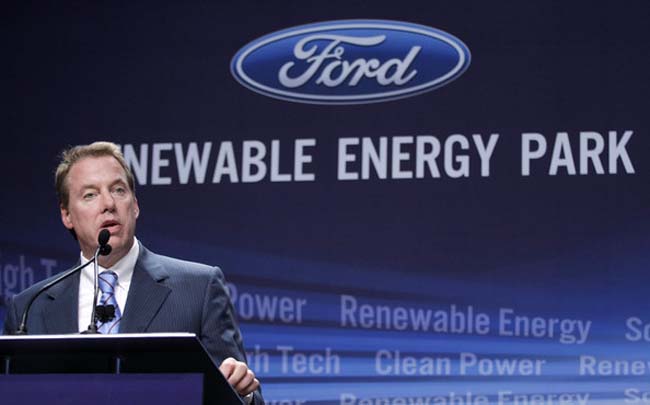 Editor’s Note: The opinions and ideas in this piece do not necessarily reflect my own, the topic and the argument are certainly worthy of debate.

Ford Motor Company announced at the end of February a five-year plan to lessen its environmental impact by reducing landfill waste 40% per vehicle produced — cutting waste from 22.7 pounds per vehicle to just 13.4 pounds by 2016. It’s an ambitious plan, but Ford’s track record here is quite good, as they’ve already done this once. From 2007 to 2011, Ford reduced their per vehicle landfill waste by 40%, dropping from 37.9 pounds to the current 22.7 pounds.

While Ford should be commended for their commitment to green manufacturing, it’s important to understand that this announcement isn’t just about being green – it’s also about drawing a sharp contrast between Ford and their domestic competitors GM and Chrysler.

What Ford is Doing

As a result of this reduction, Ford expects greenhouse gas emissions from manufacturing facilities will drop 30% per vehicle between 2010 and 2025. Water and energy use will drop by 30% and 25% respectively, also as a result of reducing waste.

For example, at Ford’s Van Dyke transmission plant, the company figured out how to stop sending as much as 10 tons of fabric coolant filters per month to landfills. As a result, the plant reduced landfill waste output by more than 111 tons between 2010 and 2012.

Finally, Ford is likely to see some financial benefits from their plan. In 2012, Ford announced they generated $225m in revenue through recycling 568,000 tons of scrap metal in just the U.S. and Canada.

Yet the story here isn’t just about Ford – it’s also about the lackluster environmental efforts of Ford’s domestic competitors.

In the face of Ford’s bold plan, General Motors didn’t wait very long to tout their environmental impact reduction record. Just a couple of weeks after Ford announced their waste-reduction plan, GM released some press notes reminding us all about their Cadillac Urban Garden. GM’s innovation was to use old shipping containers to hold over 1,400 plants in a community garden, rather than turning these containers into waste.

While this is a clever and innovative concept, it’s not quite the same as a 40% reduction in landfill waste worldwide. GM’s recycling efforts, for example, would seem to fall short. While there are stories of smart recycling efforts at GM – from cardboard packaging being recycled into Buick Verano and Lacrosse headliners, to plastic shipping materials being made into air deflectors for the Silverado and Sierra pickups – these one-off policies simply don’t compare to Ford’s sweeping commitments.

Chrysler’s response to Ford’s waste reduction plan seems to be silence. There have been no announcements, no bragging about vehicles made with recycled parts, or stories about turning landfill waste into planters, etc. At best, there are environmental pronouncements from global parent Fiat about ongoing plans to reduce energy use, reduce waste, etc. But how many U.S. consumers associate Fiat with Chrysler?

What’s more, Chrysler’s environmental reputation could use some attention. As recently as 2009, Chrysler wanted to dump sludge in a St. Louis landfill after they closed the Fenton truck assembly plant.

Anecdotes like this shouldn’t be used to indict a company, but combined with an absence of environmental planning, the contrast between Ford and Chrysler is obvious…and that’s the point. Ford is winning the race to be the most eco-friendly car company in the world, while Chrysler doesn’t seem to understand that there’s a race underway.

Ford Beating GM and Chrysler On An Increasingly Important Issue

As the car buying public becomes more educated about the environment and learns more about Ford’s environmental commitments, it’s logical to expect these consumers to compare Ford’s eco-friendly record with that of GM and Chrysler. If this comparison dramatically favors Ford, it’s all but certain to effect vehicle sales.

JD Power recently revealed the top 10 reasons that consumers choose a specific vehicle, and two of these reasons – technology and vehicle image – are inexorably related to the environment. As Ford gains credibility as an environmentally friendly automaker, the image of their vehicles will only improve. As Ford discusses the technologies they use to reduce waste, energy use, etc., their reputation for technological innovation will improve as well. If JD Power’s survey is to be trusted, these improvements will help sales.

While the long-term impact of falling behind in this “green arms race” is unknown, it’s safe to say that GM and Chrysler need to proceed carefully. If consumers begin to perceive these companies as technologically out-dated and Earth damaging polluters, the consequences could be fatal to their survival.

Author Jason Lancaster has followed the auto industry for a long time, and remembers when Ford first began planting grass on the roof of their Dearborn truck plant. When Jason isn’t critiquing the auto industry, he’s writing for Anderson Ford Motorsports, a company that sells performance parts for the Ford Mustang.

This article was contributed by a Guest Author. The views and opinions expressed in this article belong to the author and do not necessarily represent the views of our publication. For more information about contributing articles as a guest, please contact us. Thank you.