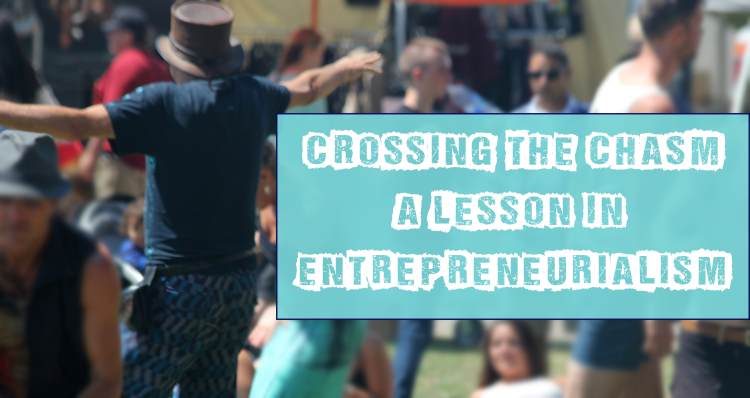 Lessons on entrepreneurship can be found almost anywhere. There have been books, videos, and articles on what entrepreneurs can learn by examining everything from con artists to April the Giraffe. At the same time, experts and armchair analysts have used similar sources to find examples of mistakes for entrepreneurs to avoid. So, if I told you there were lessons to be learned from the guy who’s dancing when no one else is, would you think it’s about an approach to mimic or something to avoid?

When someone does something to stand out, we take notice. Granted, this isn’t always for the best – at least not initially.

One entrepreneur / business owner recently illustrated this point by using the example of a man who is dancing at an outdoor concert while everyone else is just milling around. His movements are exaggerated and designed to stand out. Several people walk by, a few give him some strange looks and there’s little doubt he was the focus of a Snapchat or two.

But therein lies the genius.

History is littered with predictions that were wrong on an epic scale. From Bill Gates’ decree that e-readers would never catch on to the people who thought the iPhone would be a flop. But pure, unadulterated entrepreneurial effort is a force to be reckoned with.

As we watch the video, we watch our would be entrepreneur being rejected by several people as he attempts to attract followers.

But then, something amazing happens.

He finds a like-minded person – his first customer. Hughes makes a good point here about how a first customer is a leader in their own right. Theirs is the first voice that lends credence to our entrepreneur.

Before you know it, the original free-thinker is lost in a sea of customers and followers.

Within just a few minutes we’ve seen an entrepreneur being rejected as a matter of course blossom into entire market fruition – an entrepreneur’s dream of having so many followers it qualifies as a movement.

Leadership starts from your first follower

It’s worth noting that the first third to half of this phenomenon took place by just one person. It all started with the most humble of beginnings – a shirtless man dancing at a concert. At first glance, he has little, if anything to offer.

But within just a few minutes we see a lone maverick transformed into the leader of an entire movement. While people initially just saw a shirtless guy dancing, entrepreneurs saw a leader.