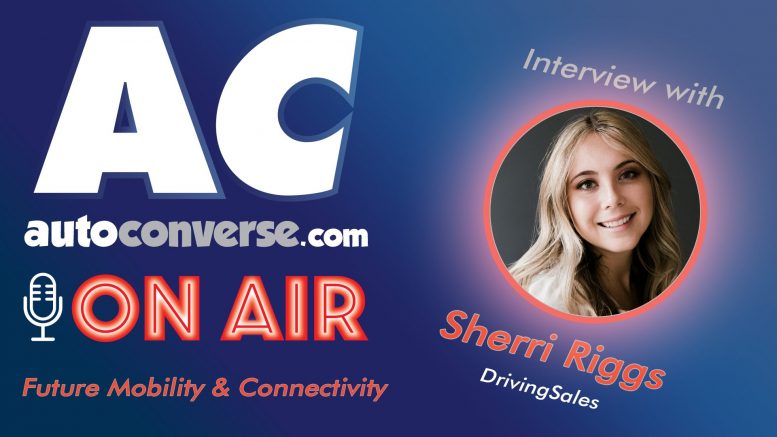 Automotive B2B content marketing is a fascinating and competitive space. A good formula for success involves different types of content, ranging from journalism to commercialism. A good formula also involves a mixture of mediums.

Broadcasting and journalism aren’t new to Automotive. But there is a definite growing interest in it, well, with live streaming at least. Many in Auto Retail and Automotive B2B have begun taking to live streaming regularly, Facebook Live specifically.

Live streaming is similar to broadcasting, but it’s not exactly the same. As for journalism, however, that is an entirely different practice, and not something being adopted as widely. At least not by the new wave of live streamers.

On DrivingSales.com, though, there is a focus towards journalism, in addition to a variety of other types of content. And now, there is a new force behind that journalism. Her name is Sherri Riggs.

Last month, we welcomed Ms. Riggs onto our Live Weekly Broadcast – AutoConverse ON AIR. Riggs has been involved with every part of creating television, producing, anchoring and reporting. Because of this, she understands the power behind sharing stories. And using broadcast journalism to inform and bolster people’s passions and interests.

When it comes to content for business, Sherri endorses the 80/20 Rule, saying “Twenty percent of what you post can be self-serving. But the other 80%, must be quality content that everybody can use. If it’s too self-serving people aren’t going to click on it, and what’s the point of that?”

Sherri may be new to automotive, but she’s no stranger to understanding the power of creating content to share stories. She also has her hands on the production side, producing stories and videos for the site. Sherri is also involved with the community on DrivingSales.com, ensuring that content stays on track as well.

“If people post anything that’s too self-serving, too product-y, too pitchy, I block it,” she says. ”Dealers can get pitches wherever they want. They look right, there’s a pitch, they look left there’s another pitch.”

In the conversation, we talk about companies such as Netflix and HBO. Divergent companies that use creative, original content and programming to grow and entertain their audience. It’s a method proven time and again. And with some help, even the smallest B2B outfit can do the same thing.

Enjoy the preview of this conversation in the video, and check out the complete conversation on the podcast, ON AIR :: Bringing Broadcast Journalism to DrivingSales.