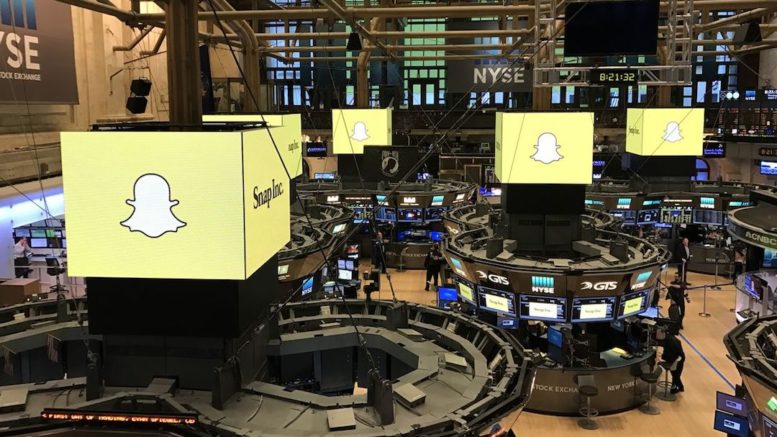 It’s the day technology companies and investors have been waiting for: Snap, the parent company of disappearing-photo app Snapchat, has finally priced its stock in the most highly anticipated initial public offering in years.

The IPO price is above Snap’s expected range of $14 to $16 per share, and values the company at $24 billion.

Snap stock will come with a few caveats that investors should be aware of before buying. Snap grew revenue roughly 600% in 2016 to more than $404 million, but it is still not profitable, losing nearly $515 million last year.

That means that Snap stock will be insanely expensive: At a $24 billion valuation, Snap shares will have a price-to-sales ratio of 59, making it far richer than Facebook (FB, +0.15%) stock and other social media companies—and likely the most expensive tech IPO ever. (If you use the ratio of market cap to sales, Snap is still valued at nearly 49 times sales—far more than its tech company peers.)

There is one positive sign that Snap has timed its IPO perfectly: U.S. stocks hit new highs on Wednesday, with the Dow Jones industrial average rising more than 300 points to above 21,000 for the first time.

This is the first installment in a five-part series of articles focusing on best practices to up your content marketing game on the “big four” platforms: Twitter, Facebook, LinkedIn and Instagram. Stay tuned for future installments and share your own favorite tips in the comments

General Motors is saying good-bye to its Opel and Vauxhall brands, ending its presence in Europe as a major automotive manufacturer after nearly 90 years of history there.

GM said Monday it has reached a deal to sell its European operations to French automaker PSA Groupe for $2.2 billion, a decision that shakes up the automotive landscape in Europe and could lead to additional consolidation in the global automotive industry.