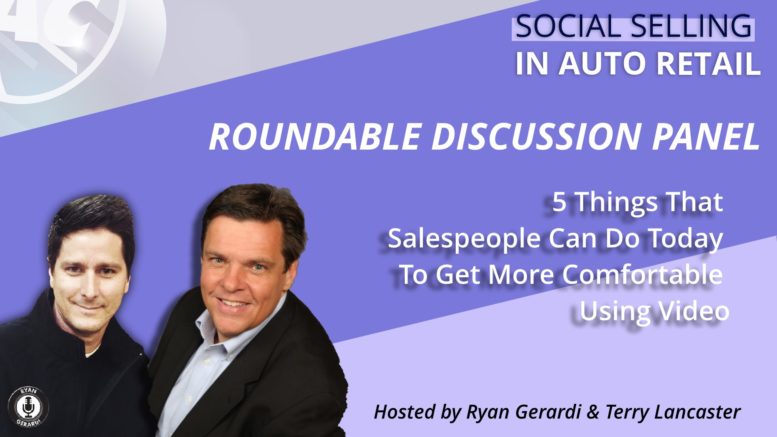 You’ve heard it said before…video is one of, if not the most powerful ways to get yourself out there and connect with customers. So why aren’t you using video for that purpose?

Chances are it’s because you’re frightened. You tell yourself it’s because you don’t have time, but truthfully you probably hate the idea of seeing yourself on video. Deep down you are afraid that you won’t come across as A-M-A-Z-I-N-G!

Well, you’re not alone. As someone who has been recording people for more than 20 years, one thing I learned quickly is that most people do not want to be on video.

To Video or Not to Video

With more and more salespeople finding their comfort zones being on video, this could be putting you at a disadvantage. Don’t get me wrong, being on video isn’t necessarily detrimental to your success, but leveraging video for your success is probably a lot closer in reach than you might imagine. And begins by doing it!

Which is why this month for our Social Selling in Auto Retail Webcast Series, Terry Lancaster and I will be looking at 5 things that salespeople can do TODAY to be more comfortable using video.

Based on Terry’s recently published article, this session shall provide a glimpse of the type of material covered in Terry’s Social Selling Workshop that he facilitates about once a quarter.

The five tips include:

Are you looking for ways to leverage the power of Social Media as an Auto Sales Professional? Do you have ideas to contribute?

If so, post your comments below to be part of the conversation, and also be sure to sign up free with our Social Selling in Auto Retail Coaching Program, one of six different coaching programs we offer under the Auto Retail Marketing Webcast Series.