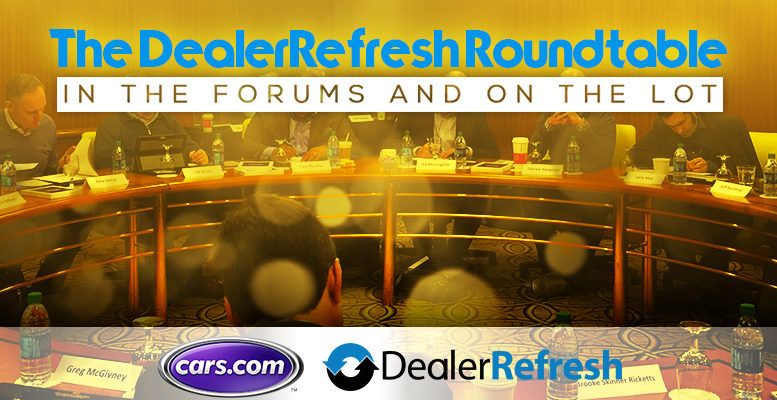 After nearly an entire year of collaborating, designing, and experimenting, I am excited to introduce our latest new media program – The DealerRefresh Roundtable. What began as a series of conversations between DealerRefresh Founder Jeff Kershner and myself more than two years ago, and which secured official support from the B2B team for Cars.com at NADA 2017, the Roundtable is now officially being unveiled to the world.

Like the other exciting new novelties we have introduced for DealerRefresh such as Refresh Fridays and the DealerRefresh Podcast, the Roundtable project is designed to be a platform where we can explore the hottest topics going on RIGHT NOW in auto retail in a way that is meaningful and useful so that all of us in the industry can take action, innovate, and improve.

Exclusive Partnership
During a scheduled meeting with the marketing team in the Cars.com booth at NADA 2017 in New Orleans, we exchanged ideas on how Cars.com and DealerRefresh could band together to create a unique partnership that served both entities and the automotive community. We ended the meeting with a mutual agreement that Cars.com would be the exclusive sponsor of a new media broadcast brought to you by DealerRefresh. Although we didn’t have all the details worked out until months afterward, we knew walking out of the meeting that we were going to do something special.

In the Forums and On the Lot
At one point shortly after NADA while expanding on our original ideas, the tag line ‘In the Forums and On the Lot,’ which was coined initially by Cars.com Senior Director of B2B Marketing Tari Haro, immediately stuck. During this phase we considered many different names for the show, and the show format, and ultimate came up with the Roundtable.

Show Format
The idea behind the Roundtable is to conduct a talk show-like environment but in a video conference format where guest panelists can join remotely and where viewers can attend remotely as well, like a webinar, but unlike conventional webinars there is no Q&A or audience participation.

Each show is limited to 30 minutes and 2-3 guest panelists along with your hosts – Jeff and Ryan. We typically open up with a couple trivial subjects before diving into deeper subject matters, chosen ahead of time based on the panelists and what’s going on in the industry.

In July we ran our first test – Session #1, in a closed invite-only setting, which went quite well. We have since conducted a total of 5 sessions, one a month, with number six scheduled for December 7, and will continue doing them monthly.

Beginning in January 2018 we will open up attendance for the public to attend the live sessions.

When you view the recordings you will see it moves along swiftly and combines conversation with debate and tough questions, opinions, and some good laughs here and there too.

Recordings and Podcasts of The Roundtable
The shows are recorded, then edited, reproduced and published as videos and as podcasts. For now, each session is being published to the forums and tagged with ‘the dealer refresh roundtable’ so you can catch all published sessions with this link.

You can also find them in the videos section of the DealerRefresh Facebook page where there is a playlist featuring all published Roundtable sessions, and eventually on the all-new DealerRefresh Podcast on Soundcloud (or in your preferred podcast app).

*UPDATE – As of March 1, 2018, AutoBurst Media will no longer host and produce this program. Please contact Ryan Gerardi for more information. Thank you.