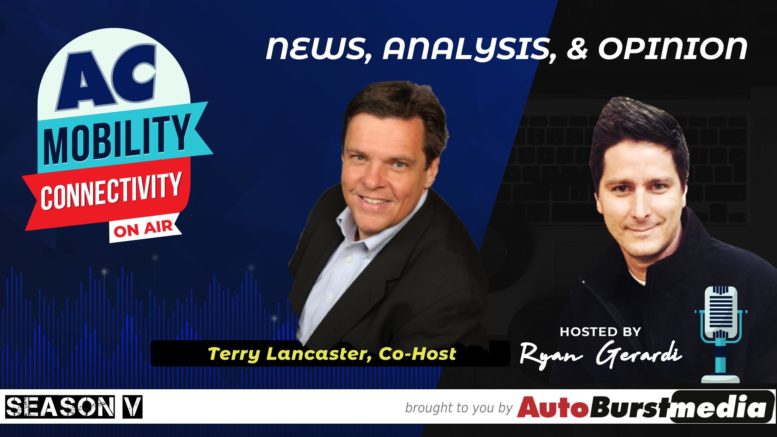 For whatever reason, we did not make a formal announcement about season four of our weekly show – originally referred to as AC ON AIR but now being called The Mobility Tech & Connectivity Show. It’s a long name but it has a nice ring to it, I think. And so does the show.

The last announcement we made about the show was for season three, at the start of 2019. The show was initially launched in March 2018, so we were going on almost a full year running it. Launching a new (third) season to kick off the new year seemed right.

Season 4 got going somewhere between then and now. What led to it was the introduction of our new logo – for the show and the podcast.

For season five we have a few new developments…,

For one, as previously mentioned we are officially calling it The Mobility Tech & Connectivity Show now, so that warrants a season change.

Secondly, we are bringing on an official co-host.

And thirdly we are also aligning the show with AutoBurst Media as our exclusive presenting party.

If you’re a regular viewer (or listener) to AutoConversion then you’ve surely seen Terry Lancaster. Terry has been participating in the show quite regularly since last year. He’s a real swell guy full of wit and charm, and he has a real knack for divvying out great one-liners. He also has his own program called the Get Ya Some Radio Show where he conducts weekly interviews with salespeople and entrepreneurs and all the people who depend on them.

You may not see Terry on every show, but when you continue to see him and you know it will be a special time and not your usual guest appearance format.

As the exclusive presenting party, AutoBurst Media stands to benefit as the sole brand behind the show. In previous seasons, we used the show as advertising inventory for its pool of advertisers.

This is a bold move on our part. By aligning with AutoBurst Media as the exclusive presenting party, it changes the way we incorporate brands into our repertoire and it gives us a chance to grow this part of our business. AutoBurst Media is a young unknown entity in the mobility tech space and we hope to change that by making it the exclusive presenting party.

The above was a direct quote from me in the press release.

How to Watch – Listen – Participate

There are multiple different ways to watch, listen, and participate with the show. Here’s how…

For starters, the show is streamed live on our YouTube channel every Wednesday at 2 pm CST. This is the best way to watch. Simply subscribe to our YouTube channel and press the BELL icon to turn on notifications. This way, each time the show is scheduled you can be notified by YouTube. And if you can’t make the live event, then at least you will have the link to it so you can watch later.

There are two other ways to get a link to the show – Slack and SMS.

To receive a link to each show via SMS, text AUTOCONVERSE to 64600. Every Wednesday prior to the show we will send a link to the phone number you use to subscribe via SMS.

By registering with the show, you immediately become a free VIP Member. The benefits for doing this are two-fold.

If subscribing on YouTube, receiving SMS alerts, or becoming a registered VIP member aren’t good options for you, no worries. There are two other ways to keep in the know, although let me be the first to tell you, these could be a stretch. And even if one or more of the options above do work for you, you may also want to connect with the show on social media.

If you use Facebook then be sure to mark yourself as interested to our FB Event. This is where we post announcements about each upcoming show, and the show notes as well. Doing this will make it possible for you to receive notifications from Facebook about the show, and share with your friends.

LinkedIn does not have the fancy event feature that Facebook has, however you can follow AutoConversion on LinkedIn where you will be able to see updates to our company page appear in your LinkedIn feed. Updates come from a variety of publications including the AutoConversion Podcast.

And finally, there is the AutoConversion Discussion Group on LinkedIn. Unlike our company page where updates occur automatically from a variety of publications, the discussion group is member oriented and more personalized.

Join our discussion group today to immediately gain access to insider information about AutoConversion while enjoying yourself on LinkedIn.