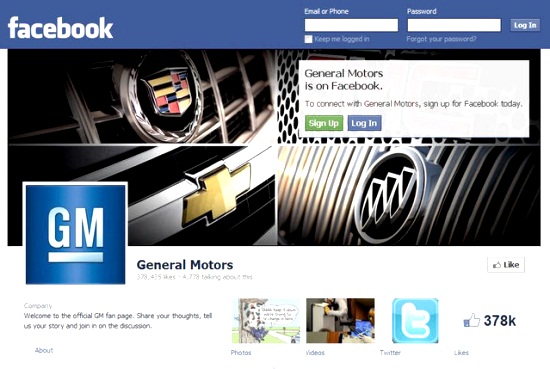 When I first heard the news about GM pulling it’s ads from Facebook I thought, “good”. I was glad that something like this occurred when it did because I think investors needed a little dose of hesitation before they bought in to Facebook’s IPO later in the week.

As you would expect, the Net is abuzz with chatter about this genuinely significant decision.

One interesting point of view I came across is that GM’s decision was premature. In a recent interview with Digiday when asked if GM’s decision was because advertising on Facebook wasn’t working , Federated Media co-founder Chas Edwards stated:

That’s a preposterous claim. I can’t imagine the first year that GM was buying TV commercials it was able to ascertain what was working and what wasn’t. It’s taken a generation to perfect and understand how to measure success in TV. For it to do that after three years seems premature to say it works or doesn’t work as a global statement. Facebook as a consumer experience and an advertising platform are both relatively new.

This is a good point. I didn’t consider it.

Interestingly, I speculated that GM did this in fear of Facebook, banking that if it can rattle the IPO enough ahead of time then it can pro-long the potentially inevitable path to Facebook becoming an advertising mogul comparable to network TV.  I have no evidence to back such a claim.

But think about it for a moment. If you are GM and you are killing it on Facebook with advertising for a mere fraction of the cost it takes on cable and network television, you dread the day that this advertising medium goes up in price, which is precisely where Facebook is headed with this IPO.

Like with Google in the early days a few hundred dollars a month would have you owning your targeted search markets. Today it takes thousands. For companies like GM, tens of thousands of dollars in advertising on Facebook could turn to millions quickly if all goes according to plan.

So is there a clever strategy here with GM? Are they going to take a blow to the chest in hopes to delay a kick in the groin a few years from now?

If so, it would be commendable.