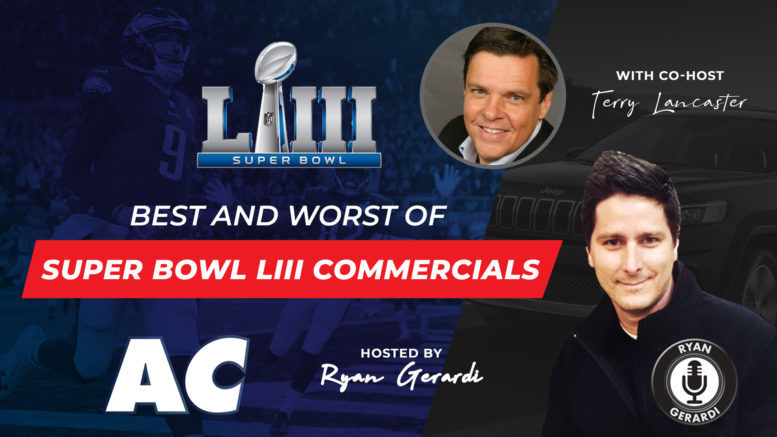 If these ads are a collective metaphor for 2019, we can expect a year with more robots, less corn syrup, more 90s nostalgia, and overall less surprises #adbowl #BrandBrowl #SuperBowlAds

Such was the apparent shared sentiment of many who paid attention to the commercials that aired Sunday February the 3rd during Super Bowl LIII. And on the following, we took to the airwaves for our live weekly broadcast to talk about the good, the bad, and the ugly of this year’s collection of ads.

Featured on the show were Terry Lancaster and John Couture, who is known by his hockey mates as ‘Cooter.’ Couture is a writer and an entertainer. Terry is Host of the Get Ya Some Radio Show, and a regular face here with us. Both live in Nashville and play hockey together, and for beer.

Here are some of the better quotes and segments from the show:

Tweets featured during the show

I was compelled to make a Venn Diagram #SuperBowl2019 @budlight #SuperBowlAds pic.twitter.com/hpSTKiw4iO

What the actual hell did I just watch?
Game of Beers? Bud Thrones??#SuperBowlAds

This halftime show band should change their name to Milquetoast 5.#superbowl #superbowl2019

Wonder if this nipple will ruin Adam’s career like it did Janet’s #SuperBowl pic.twitter.com/DuWWtDhtIN

Also, shouts out April Rain for compiling her page of all the ads, which we used during the live stream of this show recorded on February 6.

AC ON AIR is a live stream we conduct every Wednesday that explores the people, ideas, and technologies that influence how we are connected and the way we get around. The show is recorded and then featured on the AutoConverse Podcast. Depending on the nature of the content we feature the podcast and video on AutoConverse.com or here on AutoConversion.net. To learn more, follow this link.