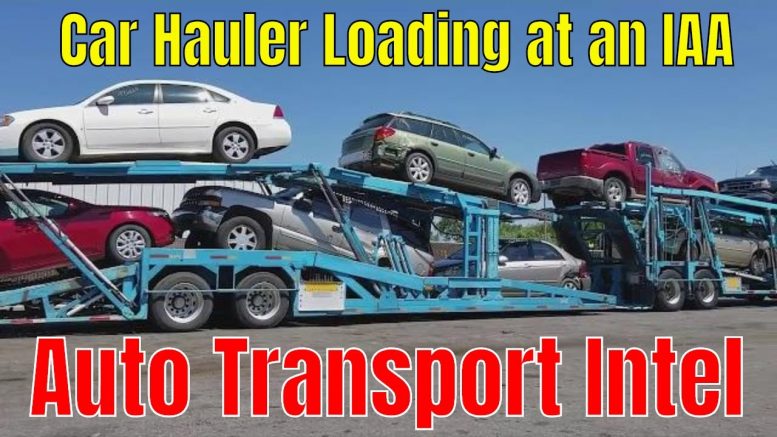 Auto auction transport is essential to salvage car shipping. INOP cars are everywhere! So while I was recording video of car haulers, I felt lucky to get an interview with a friendly driver named, Mike. He hauls for Bailey’s Auto Transport and had just got loaded with eight cars – at the Kansas City Insurance Auto Auction.

To my surprise, the forklift driver loaded all eight units! That’s not normal. Mike said IAA is special because they have such long forks. Plus, he jack knifes the truck which allows the driver to easily access all of his loading spots. As Mike says in the video, “As long as that fork that comes in, that’s where they’ll drop that car – and it’ll roll. Then you jack knife your truck.” A word to the wise; it sounds like “jack-knifing” the truck is the secret to getting the forklift driver to load all of the cars.

We also discussed Mike’s route and how his route works in conjunction with the ‘over-the-road’ company car haulers. “I’m going to get a load and I’m going to bring it back,” he told me. “And then I’m going to load up the rest of them and then take them up Monday. Because, you know, we do a lot of business up in Illinois.”

I’ve work with car haulers all over, so I asked him, “Do you go down to Tennessee? Alabama?”

He said, “The other trucks do. I’m not an over-the-road hauler. I don’t have a sleeper.”

That’s when Mike explained Bailey’s Auto Transport has two transport trucks with sleepers – and one without. The sleeper cabs are for the over-the-road haulers. As a result, Mike moves cars for those trucks hauling the longer routes. This is common with small fleets where dedicated routes help keep business profitable and growing.

The owner, Patrick Bailey, is a seasoned veteran of the salvage vehicle transport industry. Therefore, he’s very knowledgeable and dedicated to making auto transport a better industry for all.

Please give him a call at 314-471-5541 if he can help you with your auto transport needs. Hence, I’m definitely going to be talking with him more often.