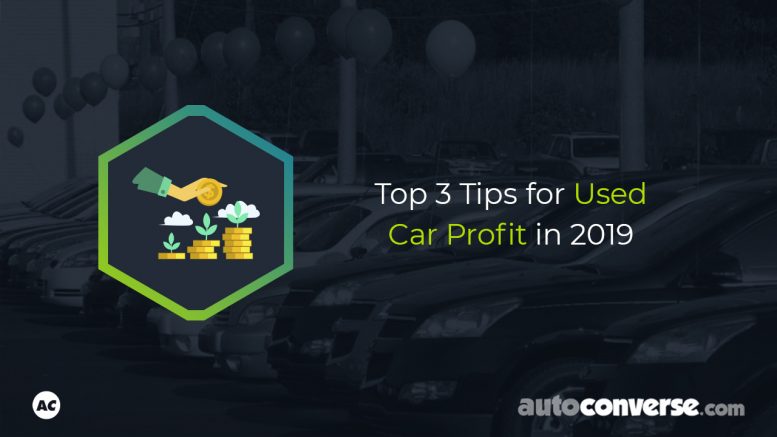 Are dealerships working on an outdated model of success when it comes to profit? What, if anything, is squeezing profitability in used cars from dealers? With so much talk about margin compression and disruption, you’d think the future for auto retailers would be bleak. But is it?

That depends not so much on who you ask, but what you ask.

The Internet has proven to be one of the greatest disruptors of all time. For the auto retail business especially. Suffice to say, the Internet forced transparency. Which is why I prefer to use the term auto retailer as opposed to car dealer. The days of “dealing,” if anything, have a bleak future, yes. But not RETAILING.

Margins from new car sales have all been disappeared. This has forced franchise dealers to rely on bonuses and incentives from the OEMs. It has also caused savvy dealers to focus more intently on used car sales, and fixed ops.

In a recent conversation with auto industry veteran Chip Dorman from Torque Analytics, Dorman poses some tough questions to the auto makers:

“Why would a dealer want to pursue razor thin incentives with new cars when the used market is more lucrative? If dealers are going to be able to fully engage with customers and promote new cars in the way OEMs want, then OEMs need to make products people want to buy, and make them profitable for dealers to sell.”

The average buyer today is savvy, and they know that there’s simply more value – and more wiggle room – in buying a used vehicle. Dealerships know this too, and try to work both ends, often pushing the more lucrative sales of used cars while treading water and doing the bare minimum new car business to keep OEMs happy.

It’s a tough line to walk and it’s one that doesn’t always make sense. And it leaves dealers wondering if they’ll ever get the help they actually need from OEMs.

“OEMs need to show some discipline and need to understand that without the dealers, they’re toast.”

All of this begs the question: Is the new car business in trouble?

Not really, according to Chip:

“Cars age and die,” he says, “it’s part of a natural cycle. The key is in dealers being able to offer high-quality used cars from further along in that cycle while also offering new options.”

At the same time, they can fill in the gaps through their own service department, ensuring used vehicles they release into the market have a better chance of coming back to them for resale in good mechanical condition.

It’s essentially a more modern and auto-centric spin on the old adage.

Beyond the OEMs – Profitability in Used Cars

Chip doesn’t just focus on what OEMs need to do to help dealers. The fact is, dealers also need to step up and look at how they can control (or influence) their own profitability. And one great area to start is how dealers acquire used vehicles and bring them to market.

The first key is to adapt to new ideas and stop holding on to hitting volume numbers – quality over quantity. We have the tools and data now to know what we need to buy, what we should pay for it, and how we plan to dispose of it, e.g. retail, wholesale, or auction.

Chip uses a his previous dealership experience to illustrate the point:

“[Back in 2008] it was not uncommon for a dealer to sell 600 or 700 plus cars a month. Well, the truth of the matter is they lost their butt on over half of them. They would do anything to hit a volume number. So, yes, they sold 700 cars, but the total gross at the end of the month was nowhere near what we did [just a few years later] with the Internet and 400 to 450 cars a month.”

The most common forms of used vehicle acquisition are vehicle trades, dealers trades, and dealer auctions. But one emerging trend is acquiring used vehicles from private sellers. Proactively buying used cars from consumers off the street gives dealers a competitive edge. They can find more rare vehicles and avoid auction fees. Plus, it helps bring in new customers.

Another emerging trend are virtual dealer auctions. In fact, Dorman went as far as to suggest removing the phrase ‘go to auction’ from your dealership lexicon.

“I can tell you right now if I owned a dealership and a used-car manager said ‘I’m going to the auction,’ they would be fired.”

Instead, he suggests making the most of new technology and software like Stockwave which allows dealers to looks at multiple auctions at once.

“They are no longer tethered or limited to what they have in front of them. They’re not tired from traveling to some far flung auction on a hunch or a tip. They can come into their office, check out auctions from anywhere they want and use the internet and their knowledge of the local community to determine which cars will deliver the best return and reduce margin compressions.”

Looking ahead to 2019, I asked Chip what are the top three things he thinks dealers, ahem, auto retailers, should be thinking about this year. Specifically as it pertains to profitability in used cars. He said…

Essentially, it comes down to working smarter, not harder, and utilizing the tools and resources that exist. Dealerships willing to change the way they see profit both at the Big Picture and Per Unit levels will find ways to cut losses and improve inventory.