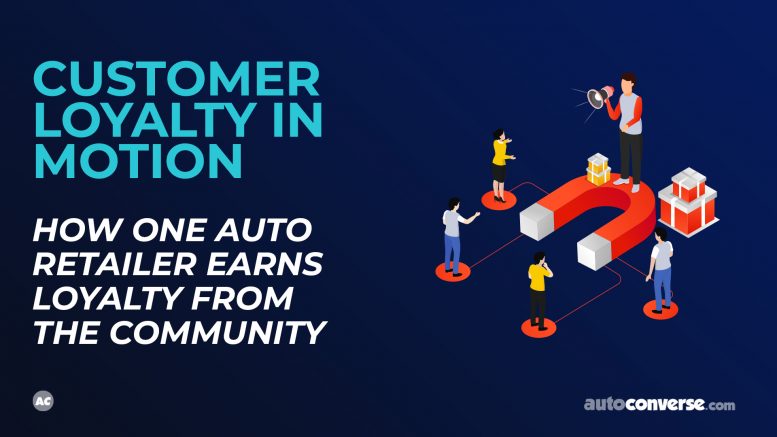 Customer loyalty is often a topic that garners attention…but usually in theory, though, not always in practice. Sure, we can talk about loyalty programs and incentives to retain customers, but what if we’re missing opportunities simply because we aren’t jumping in as early as we should? Or because we aren’t sticking around in ways we could be?

Consumers are not often seen as a potential customers until they become a “lead” or “up” with a dealership. These are industry terms used to classify and categorize consumers. And it’s because in sales, sales personnel normally only want to deal with people that are “in market.”

But what about people that are not in market? Should dealers be kicking them to the curb?

Not at all, according to Get Ya Some Radio Show Host Terry Lancaster.  Terry has a unique view on that window of opportunity. And it’s a key subject matter in our conversation from earlier this month.

“At the dealership level we get so excited about the auto shopper experience in that transactional period of the 10 or 14 days from the time they send in a lead to the time they drive out of the parking lot behind the wheel.  But that’s just a tiny little window of the auto shopper experience,” Terry says. “It starts much much earlier. From the very first time they hear a name, from the very first time they start thinking about car, and goes on much later.”

Getting a Head Start on Customer Loyalty

Ultimately, Lancaster says that customer loyalty is all about trust.  It’s that trust and relationship that will give customers what they really want – an auto shopping experience that doesn’t take up their whole day.

“People don’t like car salespeople, people don’t trust car salespeople because they don’t know them.  What takes so long when people are buying cars is they’re double-checking everything, they’re following up, sitting at your store and shopping your competition and they’re arguing with you over every nickel and dime.  […] [But when you have] these established relationships and people come in and they trust what they say, and they make a suggestion and instead of arguing back and forth and bickering and double-checking and shopping the price everywhere else they just go, ‘Okay that makes sense.’

When you have that trust factor already built in you don’t have to spend so much time building it and going back and forth and stuff.”

Cathy Nesbit agrees. Nesbit heads up community and social relations at Harry Robinson Buick GMC in Fort Smith, Arkansas. She focuses her energy on improving the customer experience literally from the first moment a customer makes any kind of contact.  From spending time increasing dealership volunteer efforts within the community to ensuring their website is customer friendly, Nesbit works with more than simply the customers in mind – she works with the community in mind.

“We do a video series here,” she says of a series they produce to simply inform and help the public.  “[We’re doing] everything to reach more people and let them know that we’re going to help them, not sell them.”  The end result is a community that isn’t made to feel like little more than a customer base. By becoming more involved in the community and offering useful, thoughtfully developed and well-produced content, they become a resource in the community.

This approach handles one of the biggest challenges for auto dealers, and anyone else working with the public, according to Cathy.

“One of the challenges that you face when you work with people is just keeping them positively motivated to follow the process and to have a process that engages customers.”

Customer loyalty isn’t just about what you’re offering to the people already coming in the door.  It’s about starting from the ground up – Day One, and positioning yourself as a resource. Developing relationships and trust doesn’t just earn you customers (though it will). It develops better referrals and a better reputation locally.

The world may have moved toward impersonal online sales for many things but when it comes to big items, many people still want to work with someone they know and trust. That builds loyalty far stronger and more effectively than stamp cards, coupons or anything else.

About this Video and Podcast

The video and podcast featured in this post were recorded in October 2018. They feature the aforementioned Tarry Lancaster, and Terry’s colleague Catchy Nesbit who heads up community and social relations at Harry Robinson Buick GMC in Fort Smith, Arkansas.  They were produced as part of the Auto Shopper Experience webcast series featured here on AutoConversion.