Are you a Prius lover and a Facebook afficionado? If so then you’ll want to enter Toyota’s contest and let the world know just how much you do love your Prius. 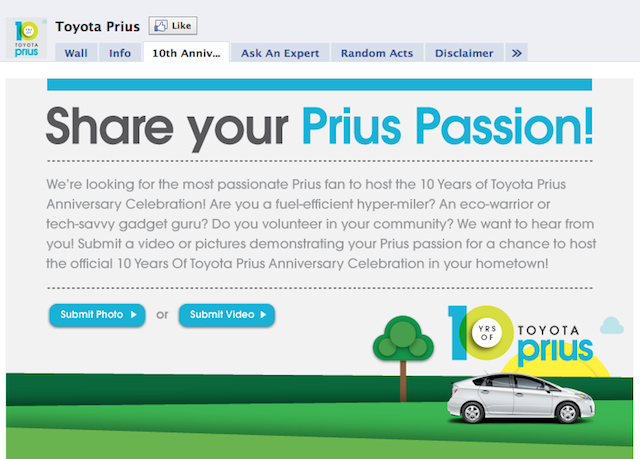 The contest guidelines are pretty straightforward, but I like how they describe what they’re looking for:

Are you a fuel-efficient hyper-miler, an eco-warrior or tech-savvy gadget guru? Do you volunteer in your community? Toyota wants to hear from you! Submit a video or several photos demonstrating your Prius passion for a chance to host the official 10 Years of Toyota Prius Anniversary Celebration in your hometown.

Videos will be narrowed down to the top 10 finalists and from there the winner will be selected by the Prius-loving community.

You have until August 13, 2010 to enter. The winner will be announced on August 30, 2010 and will host their own hometown Toyota Prius Anniversary Celebration on September 10, 2010. You can learn more about the contest and enter at http://www.facebook.com/prius.

On a similar note, one of our efforts here at AC is to bring all these contests, games, and giveaways out there by the car makers to you and the best way to keep up with them is by following us on Twitter and/or Facebook.

Now let’s hear you say, “What a feeling!”