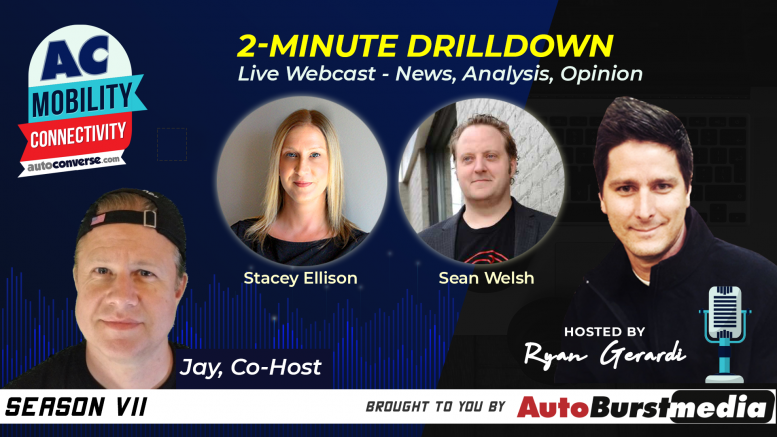 This week on the Mobility Tech & Connectivity Show we are back with the “2-Minute Drill Down” where two guests face off in a round of retorts limited to two minutes each in response to select current events happening in the world with your hosts Jay and Ryan.

News Items and Talking Points Include…

Giving back, improving the quality of life for dealership employees, and sharing success are Ellison’s top priorities. More than anything, Stacey wants to help and lead others to the same success level I have been blessed with over the past decade.

Sean is CEO and Co-founder of Car Biz Done Better, a vendor agnostic dealership advocate whose sole purpose is to work with dealers to understand their digital marketing while avoiding waste and overspending.

Car rental giant Hertz has filed for bankruptcy protection in the U.S., becoming the latest iconic American brand to collapse during the pandemic. Hertz issued a statement blaming “an abrupt decline in the company’s revenue and future bookings” due to the coronavirus, but says it intends to stay in business as it restructures. According to CNBC, Hertz’s international operations in Europe, Australia and New Zealand were not included in the filing.

The SEC filing says the company plans to raise $100 million, but that number is often a placeholder that Vroom will update as it gets closer to listing its shares.

The company said that the COVID-19 pandemic hurt sales in March and the company reduced its inventory, among other defense measures, as a result. Vroom said it had furloughed roughly a third of its staff and reduced salaries for the remaining workers, including executives. The company said it had $156.4 million in cash and equivalents at the end of April.

Spotify Technology has seen how podcasts benefit its platform. The company decided to strike while the iron is hot and signed a deal with comedian Joe Rogan to bring his popular “Joe Rogan Experience” podcast series to its platform.

The Joe Rogan Experience podcasts will debut on Spotify in September. Eventually, Spotify will be the podcast series’ exclusive home.

According to the Wall Street Journal, Spotify agreed to pay more than $100 million for the Joe Rogan Experience podcasts. The amount is almost one-fifth of the $517 million gross profit the company generated in the first quarter of 2020.

Last year, Spotify set out to spend as much as $500 million on podcast-related acquisitions. The company purchased several podcast startups.

A man charged with drug trafficking offenses was sentenced to death by Singapore’s Supreme Court over a Zoom video call last week, leading to criticism from international human rights groups.
The move marks the first death sentence in Singapore issued via a remote video conference call and is only the second known case of capital punishment being handed down remotely, Reuters reported on Wednesday

Punithan Genasan, a 37-year-old Malaysian, was informed via the remote video call he would be hanged for orchestrating an illegal heroin sale in 2011, according to court documents seen by Reuters.

Restaurants rebel against delivery apps as cities crack down on fees

Restaurant owners are trying to figure out ways to stay in business during the coronavirus pandemic, which has hammered their industry. Many restaurants have had to close their doors to customers, while others have turned to food delivery apps such as Uber Eats and Grubhub to fill the void.

But few of these app services have figured out how to make much money. Amazon, a company that many would consider an expert in e-commerce and logistics, tested the market and left about a year ago.

Stamos said that 90 percent of his online orders come from Grubhub and that the company has been forcing him to pay “extraordinary commissions.” He said that he’s been trying to get off the delivery apps since he started his restaurant five years ago but that the pandemic has dramatically tightened the squeeze.
Other restaurateurs have also complained — and attracted the attention of city politicians.

In response, President Trump tweeted, “The Radical Left is in total command & control of Facebook, Instagram, Twitter and Google. The Administration is working to remedy this illegal situation. Stay tuned, and send names & events. Thank you Michelle!”

Is Big Tech going too far with censorship?

Here’s what one citizen pundit has to say about it…