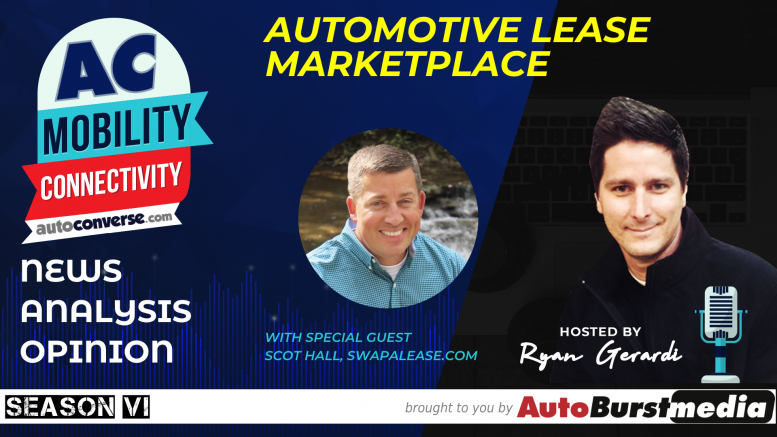 Getting into a car lease is relatively easy, and convenient compared with owning the vehicle. But try getting out of your lease. That’s a different story.

The primary reason that getting out of a lease can be difficult is because when you signed the lease you agreed to pay for the depreciation that is expected to occur during the time that you have the car, plus any fees, taxes, and interest.

Leasing companies base the deal they make with lessees on the assumption that all payments will be made and the vehicle will be returned to the right place at the right time. If you return the car early, they won’t get the rest of their payments. Since the car is no longer new, they can’t just lease it out again.

The Swapalease.com marketplace is comprised of new and pre owned leases, as well as existing leases that are available for assumption by another individual.

Our Special Guest this week is Swapalease.com Executive Vice President of Operations Scot Hall. We will be talking with Scot about the consumer experience of this vast marketplace, and how Swapalease.com is helping automotive retailers reach millions of potential new customers across the USA.

German carmaker Volkswagen is investing heavily in electric cars. The company has rolled out 250,000 electric cars since the start of the company’s electric vehicle programm in 2013. This month, Volkswagen has set itself an ambitious target to sell another 250,000 in the next year. Juergen Stackmann, Member of the Board of Management of Volkswagen said that the company is fully committed to the Paris Agreement and is looking to go CO2 neutral by 2050.

The age of the electric pickup truck has (almost) arrived, and with it the promise of all of the torque and none of the tailpipe emissions. Newcomers including Rivian, Bollinger, and Tesla are launching electric pickup trucks in the next few years. And America’s Big Three won’t cede market share on a segment they’ve dominated for half a century. Ford and GM have confirmed electric pickups due in the next two years. And in the most obvious sign of changing times, GM’s return of the Hummer might show that even a brick-like, gas-guzzling affront can evolve into a modern electric hero.

In a bid to green up its act, online retail giant Amazon has put in an order for 100,000 battery-electric delivery vans from Michigan-based EV startup Rivian. Those vans will sit atop the very same Rivian “skateboard” architecture that will underpin the startup’s R1T pickup truck and R1S utility vehicle, not to mention a forthcoming luxury crossover from Ford’s Lincoln brand. But beyond that, not much was known about the delivery vehicles – until now. Amazon projects that 100,000 of these electric Prime vans will be on the road by 2030.

The MTC Show is a live weekly webcast that features news, analysis, and opinion from people about ideas and technologies that influence how we are connected and the way we get around. The show is recorded and then featured on the AutoConverse Podcast.