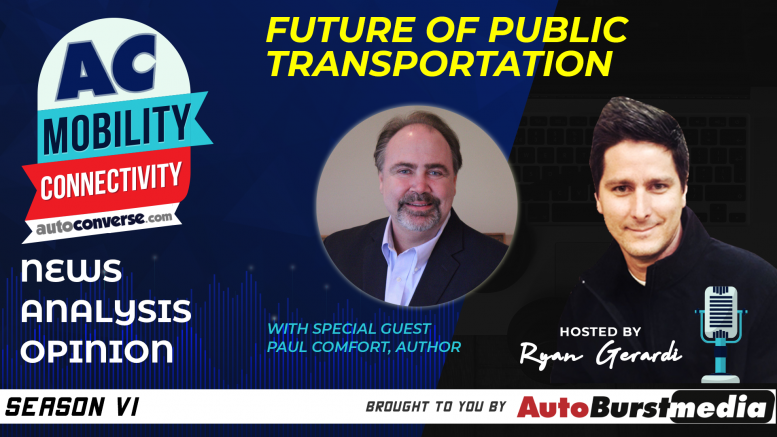 Transit agencies are under funded and operate in a public ecosystem that is constraint oriented. For-profit businesses such as Uber, Lyft, Car2Go, Google and countless others have emerged to solve gaps in the system, and they are all vying for a stake and segment of the market. They operate in a private ecosystem which in the advent of venture funding is seemingly void of constraints. And both transit agencies and for-profit companies are looking to own the increasingly important channel of communication, data, and relationship with the customer

How is all this playing out between civic institutions and private sector players?

In his new book, “The Future of Public Transportation” which you can buy on Amazon with this link, Author Paul Comfort looks to examine the coming technological revolution in public transportation with game-changing new mobility options such as autonomous vehicles on regular bus routes; hyperloop and high speed trains; and Mobility-as-a-Service (MaaS) smartphone apps allowing passengers to plan, pay for, and subscribe to a full menu of traditional public transit and private microtransit options for their travel.

The book also explains how cities are rebooting their bus networks and will further regulate and optimize the rampant expansion of e-bikes and scooters and add mobile public transit fare paying options, such as via smartphone, tap and go credit cards, and even wearable fare payment jewelry. The book not only explains what is currently in use, but also and what’s coming next.

With us this week on the MTC Show is Author and Podcaster Paul Comfort [LinkedIn], also VP of Business Development for Trapeze Group which works with public transit agencies and their communities to develop and deliver smarter, more effective public transit solutions.

Paul is chief transit evangelist and ambassador to the C-suite of Trapeze Group clients. He writes magazine articles and blog posts on transit trends and challenges, speaks at conferences, and helps promote thought leadership in our industry. Comfort is also Host of the popular podcast Transit Unplugged and you can visit the website for his book at www.futureoftransportation.com.

The move aimed to avoid throngs in confined places like concert halls, sports events and carnival parades. It did not – at least for now – apply to train stations or shopping malls, where people have only fleeting contact.
Officials from the Palexpo venue forced to cancel the major 10-day car show starting next week said they understood the move but that it could cost the local economy up to 250 million Swiss francs ($256 million) in lost business.

Cruise’s self-driving cars will be required to be operated by a human who has been issued a test vehicle operator permit by the California Department of Motor Vehicles. The company is the sixth to be approved for carrying passengers in self-driving cars in California, including Waymo LLC and Zoox Inc. With Cruise, GM is the first legacy automaker to win approval in California.

“As we move closer to launch we want the opportunity to put top candidates, partners and media into vehicles and this pilot allows us to do that,” Cruise said in a statement.

There’s a new court case involving Tesla that is going to end up setting a legal precedent. It involves a Tesla owner who had Autopilot engaged, when he says it suddenly veered left, crossed the oncoming lane and crashed into a ditch. The driver blames Tesla, while Tesla blames the driver.

The LA Times reports that Tesla has all the data that can prove what happened, but it refuses to release the data. It told the driver and his lawyer to get data from the black box, or event data recorder.

All car owners have legal rights to black box data. But on Tesla’s it does not record data from Autopilot.

Only federal safety regulators have access to operation information from a corporation. But several people have been getting killed in Tesla’s with Autopilot engaged, and it’s likely the courts are going to step in at some point to make safety-related data more accessible.