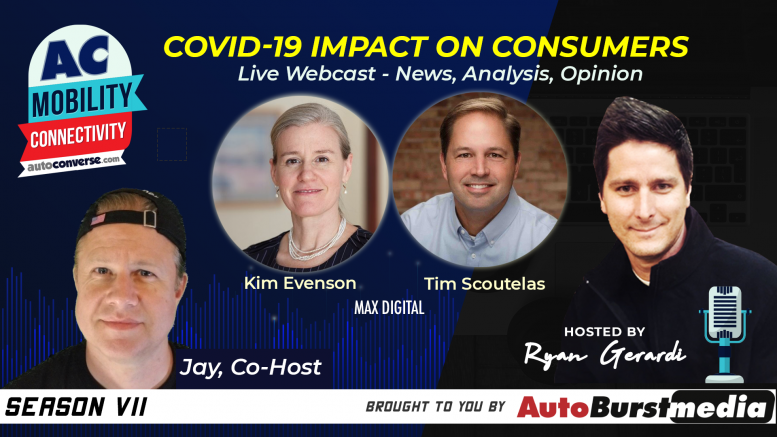 In a recent survey by MAX Digital of over 3000 people between the ages of 25 and 55 to understand how interest in purchasing a vehicle for this core automotive buying audience has changed due to the coronavirus outbreak, several key insights came to light:

One key takeaway from the survey suggests that while there are some significant shifts particularly in terms of delay, the dealership-based purchase process is extremely robust and more trusted than alternate channels to complete a purchase during this crisis.

To discuss these insights, we welcome MAX Digital SVP of Marketing Kim Evenson and Tim Scoutelas, Director of Strategic Accounts this week on the Mobility Tech & Connectivity Show.

Live audience members are welcome to join us ‘Backstage on the Zoom’ where microphones can be turned on to participate in the Q&A. To be part of the live audience on Zoom, follow the link below to register for your Zoom access now.

Apple is Breaking Up with Intel

It’s official: Apple is dropping its partnership with Intel in favor of its own processors for future Macs. The long-awaited split marks the end of one of the tech industry’s most influential alliances, and the iPhone maker said it expects the transition to take two years.

Intel has made chips for Macs since 2005, but now Apple is looking to take more control of its hardware production. The move highlights the growing power of tech titans to expand their abilities and reduce dependence on major partners.

As reported previously, Hertz, the rental car company, is in deep financial trouble. It was in trouble before the Covid pandemic, but the collapse in business travel was the coup de grace and it had to file for Chapter 11 bankruptcy.

But here’s where the story gets interesting…

In a desperate move to raise cash, the bankruptcy court allowed Hertz to sell up to $1 billion worth of stock as long as it warned investors they will probably get wiped out. And yet that did not stop investors. Trading volume in the stock is the highest it’s been in more than five years. Five years ago Hertz was trading at $70 a share. This February it was at $20. And today it’s trading at $2. And so yesterday the Securities and Exchange Commission decided enough is enough and it told Hertz to stop selling shares.

Tesla doesn’t want to waste any time before it starts building its new plant in the U.S. Documents made public this week show the EV maker wants to start construction as early as the third quarter of this year.

Tesla says it will invest about $1 billion to build the 4- to 5-million square foot assembly plant that will make the Model Y and Cybertruck.

Electrek reports that Tesla recently bought 2,100 acres worth of land just outside of Austin, Texas for $5 million and that it’s looking for up to $68 million in tax incentives.

Tesla has Autopilot, GM has Super Cruise and now Ford is coming out with what it calls Active Driver Assist. It’s part of Ford’s driver assist package, Co-Pilot360.

Active Drive Assist is a hands-free cruise control, which can operate on divided highways in the U.S. and Canada. An infrared camera tracks the driver’s eyes and head to make sure they’re paying attention. Visual warnings in the instrument cluster are used to get the driver to take back over if there’s a need, but ignore the warnings long enough, it will switch off and the vehicle will slow down.

Ford says it’s already pre-mapped more than 100,000 miles of highway that Active Drive Assist will work on. The feature debuts on some 2021 models and across the entire Mustang Mach-E lineup. And on that vehicle it can be added via an over-the-air update.

The Chinese government just re-classified hybrids as “low fuel consumption passenger vehicles.” The reason that’s significant is because China has a points system that is meant to boost the sales of EVs, and any vehicle whose wheels are driven by internal combustion engines has points taken away.

Automakers will still lose points for making hybrids but it’s no longer as many as a gasoline-only or diesel-only vehicle. It also means automakers will have to spend less money producing more-costly EVs.

This is going to benefit automakers like Toyota and Honda, who lobbied the Chinese government to get the rule change. Sales of EVs in China are not meeting expectations and Toyota argued that hybrids would help the government achieve its goals to reduce pollution more quickly.

But China could do even more to help automakers. Reuters reports that the Ministry of Industry and Information Technology is considering easing off its points system. It could allow automakers to use the points they generate next year to offset the negative points they earn this year.

If it makes that move, some believe that new vehicle launches, which are more likely to be green vehicles, will be pushed back so automakers can take advantage of the change.