Blame it on Zynga. The company is perhaps the most popular Facebook game maker online and has practically created a new niche, namely, the Facebook social gaming niche. Now Mazda has got in on the action by introducing its own social game called DriverVille.

I think we’ve entered a new wave of marketing here. Facebook is the most trafficked site online and it appears that the numbers are getting higher. In order to keep folks around and entertained there must be something for them to do there. Enter social gaming. Enter Mazda. Enter DriverVille. 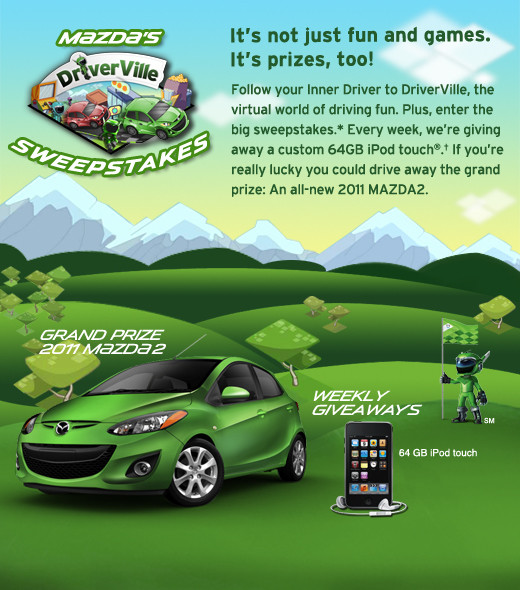 DriverVille gives gamers lots of options within the game to do cool things like:

But why is Mazda banking on social gaming to sell more cars?

“The Mazda2 is Zoom-Zoom in its most concentrated form. And DriverVille is where your ‘Inner Driver’ can learn about the Mazda2 and connect with other inner drivers in the social space,” explained Don Romano, president of Mazda Canada and chief marketing officer of Mazda North American Operations.

In a word, it’s a way to introduce a new model of Mazda vehicle but to do so in an environment where a particular market segment will more easily be reached. Mazda isn’t abandoning other marketing channels; they’ve just added a new one.

If you’ve always wanted to get in touch with your inner driver, DriverVille offers that chance.

“The Inner Driver is part of everyone that loves to drive, and your Inner Driver wants a car with unique styling and the driving dynamics that only a Mazda2 can deliver in this segment,” Strasberg emphasized.

While the market segment being targeted is younger drivers, older drivers can get in on the Mazda DriverVille action too. So why not head on over to Facebook and explore your Inner Driver right now? In Canada, find your Inner Driver here.

Keep up with the latest auto industry news on Facebook too.