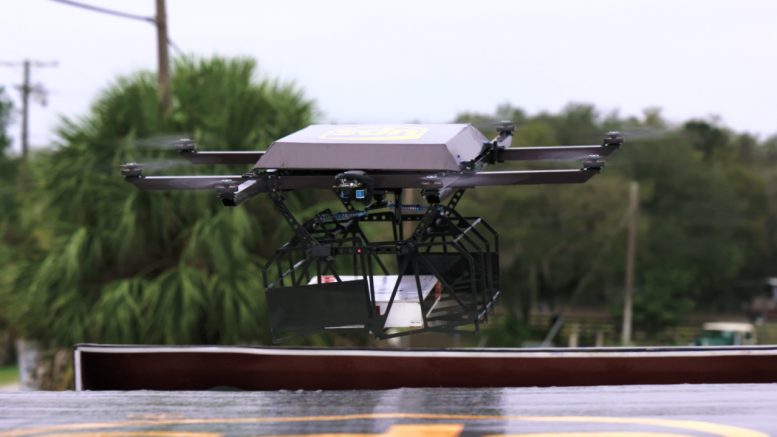 On a blueberry farm outside of Tampa, Florida, on Monday, UPS tested the use of drones for residential delivery for the first time.

The logistics juggernaut specifically launched an octocopter, or multi-rotor drone, from the top of a delivery van. The drone delivered a package directly to a home, then returned to the van which had now moved down the road to a new location. The van pulled the drone down with robotic arms, to dock on its roof.

The drone used in Monday’s test was made by Ohio-based Workhorse Group Inc., already a UPS technology supplier. Workhorse builds commercial, hybrid electric trucks, batteries and develops aerospace technologies as well. UPS has purchased 350 of its electric hybrid trucks, 125 of which are already on the road today. The company’s new HorseFly UAV Delivery system used in the UPS test was tailored to work with its vehicles.


As for the HorseFly itself, the 9.5-pound drone features a carbon fiber construction, is powered by a proprietary lithium 18650 battery pack, and capable of a 30-minute flight time at a top speed of 45 miles per hour, the company says. By contrast, most consumer drones will only fly for about 22 minutes. The HorseFly can carry a package up to 10 pounds, allowing UPS to handle a wide range of residential deliveries.

College students are permanently broke, constantly having to sacrifice the finer things in life (meals) in favor of the bare essentials (beer). By facing those hardships, few students are likely to be able to afford a self-driving car anytime soon. Can those college smarts be put to better use?

That was the case for Brevan Jorgenson. A senior at the University of Nebraska, Omaha, Jorgenson is the proud owner of a self-driving Honda Civic — and all it cost him was $700 (plus the cost of the car itself).

His newly autonomous set of wheels are due to his decision to become an early beta tester for Comma Neo, the self-driving car kit developed by former teen hacker George Hotz, now CEO and founder of Comma.ai.

Jorgenson immediately ordered the necessary parts to build his own Neo device, based on plans he found online and Comma’s free software. The finished unit he assembled includes a OnePlus 3 smartphone running Comma’s Openpilot code, circuit board, and a 3D-printed case.

Google is planning to expand a carpool service on its Waze navigation app, setting the tech company on a collision course with companies such as Uber Technologies Inc. that have a head start in the ride-sharing industry.

Google is targeting launches of its Waze carpool service in several U.S. cities and Latin America over the next several months after testing in Israel and the San Francisco Bay Area met expectations, Waze chief Noam Bardin said.

Google and Uber were once allies, but they are becoming rivals in areas such as mapping and self-driving cars.

Still, Waze’s service differs from those of Uber and Lyft, which are effectively on-demand taxi services, with many drivers making it their main job. Waze instead wants to persuade regular drivers using its navigation app to pick up people who are heading in the same direction.

To prevent drivers from using the service as their main income source—and to evade potential regulatory scrutiny—riders pay drivers up to 54 cents a mile, the Internal Revenue Service’s reimbursement rate for business travel with a personal car.

Waze doesn’t currently take a cut of a driver’s earnings, but it will likely start charging the rider an extra 15% for its share if the service is successful, Mr. Bardin said.