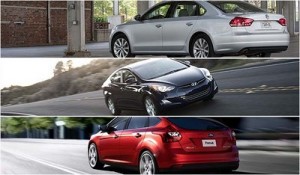 These finalists were narrowed from a wider field of vehicles vying for the North American Car Of The Year title. Those vehicles include:

And for you truck lovers, the following vehicles were in the running for the North American Truck Of The Year title:

Each of these manufacturers should be proud of their achievements. Even the vehicles that didn’t make it to the finals have something to be proud of. Simply being nominated for the honor is a feather in the cap. Winners are selected by a vote of more than 50 automotive journalists from Canada and the U.S.