As we rush through our daily routines, more and more of the minutes we spend awake are used for multitasking. Whether we are checking email while getting the kids ready for school, listening to our iPod while running and thinking about life, or watching TV while surfing the Internet, we no longer fill our daily routines with single tasks, but ultimately we are filling every minute of our days & nights with multiple tasks. For some, this is no more apparent than while driving down the highway only to look over and see the person who’s DRIVING in the car next to you with his eyes both gazing at the road & gazing down at his phone simultaneously. 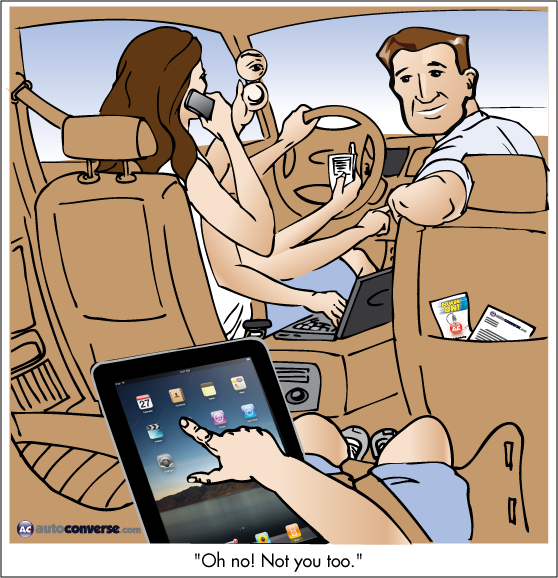 With technology seemingly advances faster than most of us can run out and buy the latest gadget it’s no wonder that we are starting to see, read, and hear more about both the benefits and the costs to our growing usage of high tech products and services. Gadgets like iPods, smart phones, GPS navigation systems, etc. have added a lot of value to our everyday lives. We can listen to the music we want, when we want it. We can watch videos from anywhere with an internet connection. We can set off to a destination without spending days prior to the trip buying and reviewing a map. The list of benefits goes on and on. The other side of this technological society that we now find ourselves in is that it’s starting to enter into everything that we do which is causing the list of tasks that we take on simultaneously to increase.

As many of us know, with anything you do, the more tasks you try to perform at one time the more your attention gets divided among those tasks, which ultimately leads to mishaps. In fact, in a recent interview, The New York Times Journalist Matt Richtel discusses the evidence that suggests that the human brain does not and can not multitask, contrary to popular belief. Thus we can only perform one task at a time.

I think that everyone can agree that the more you multitask while driving, the more likely you are to get into an accident. What’s interesting is that because of the fact that we live in such a technological society, everyone wants to talk about texting while driving, which is more of a symptom rather than the problem. The problem is that our daily lives are so full that we have to spend every possible minute working on multiple tasks. Before the cell phone was invented we had general distracted driving laws put in place because people were distracted by other driving dangers, such as changing the radio station, putting on make-up, eating, and reaching for things. According to Distraction.gov “In 2008, 5,870 people lost their lives and an estimated 515,000 people were injured in police-reported crashes in which at least one form of driver distraction was reported on the police crash report.”

The key to all of this is that you yourself as a driver should be aware that just because you hear that it’s illegal to text and drive doesn’t mean you should go install the voice-activated-text software on your phone so that you can speak your texts (although that would be a step in the right direction), it’s best to simply avoid ANY and ALL distractions while driving. When you’re on the road you’re sharing it with others and anything that has you distracted due to multitaskng will remove some of your focus from the road in order to transfer it to the tasks that can probably wait just a few minutes longer until you reach your destination. It’s also crucial for parents to explain to their young drivers that it’s not just texting while driving that can get you in trouble, it’s also chatting continuously with your girlfriends in the backseat, drinking your morning coffee, frantically searching for loose change to pay a toll, and the list goes on. Don’t become a distracted driver statistic, put down that phone, set a playlist on your iPod before you leave, and focus on the open road! 🙂