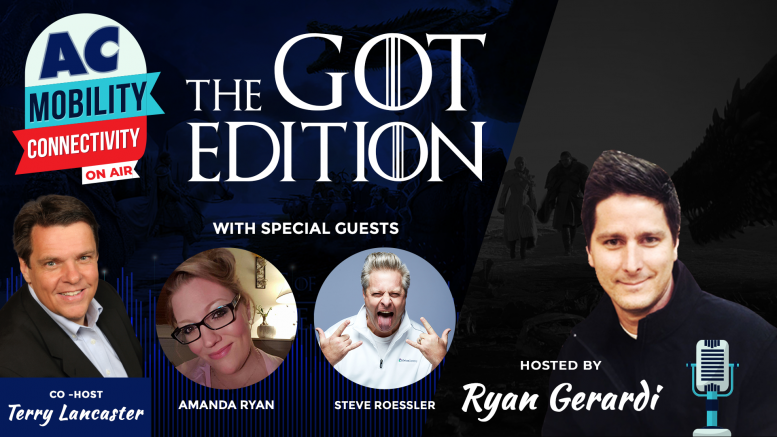 In this mashup of personalities and subjects, we close out Season III of our live weekly webcast – AC ON AIR with a zany nutty bang. Your hosts Ryan Gerardi and Terry Lancaster are joined by Special Guests Amanda Ryan and Steve Roessler for a whirlwind of conversation that opens up in Season 8 of Game of Thrones and ends with a conversation about Marriott and Airbnb.

Dubbed the ‘Game of Thrones‘ edition because everyone on this episode of the show (except for me) are GOT fans. Some of the trivia questions that came up on the show include:

According to a thread posted on auto industry forum DealerRefresh, a concerned and disgruntled employee of Cox Automotive has sent an email to customers calling for dealers to “stop your ad spend with Dealer.com immediately.” As you might expect, this came up on the show.

Marriott to Take On Airbnb in Booming Home-Rental Market

In a bid to compete with Airbnb, Marriott International is set to begin offering home-rentals, reports The Wall Street Journal. The effort, to be unveiled as early as next month following a successful European pilot, will make the world’s largest hotel operator the first to offer home rentals. Both Hilton and Hyatt chains are said to be mulling a similar concept, per the report; Airbnb seems to be going in the opposite direction — having recently acquired Hotel Tonight.

Google Street View began in 2007 with coverage of just five cities. Over the past decade, the camera-equipped car, aerial drones and the on-foot trekkers have captured some interesting images from locations around the world.

BINALONAN, the Philippines—A three-hour drive north of the Philippine capital Manila, local leaders have drawn a line in the sand against a swelling tide of scuttlebutt and innuendo. They outlawed gossip. In a world awash with fake news and online rumors, more than half a dozen neighborhoods in Binalonan have introduced an anti-gossip ordinance…

AC ON AIR is a live weekly webcast that focuses on people, ideas, and technologies that influence how we are connected and the way we get round. It is streamed live by AutoConversion, recorded, and then featured here and on the AutoConverse Podcast.

For more information about the show, how to watch live and how to get involved, follow this link to AutoConversion.

For recent show excerpts here on AutoConverse follow this link.