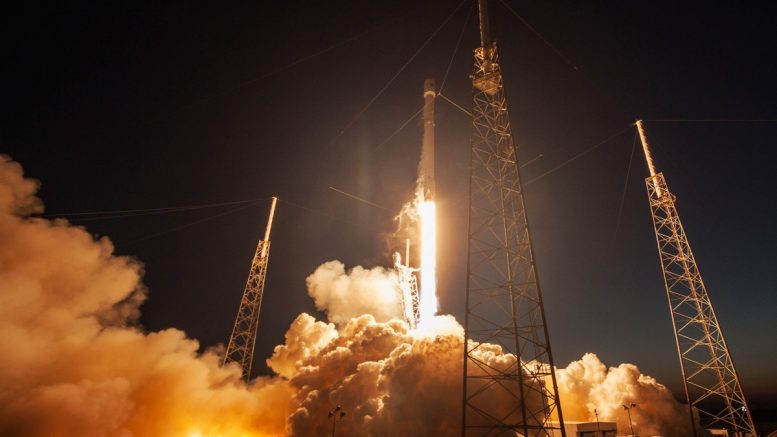 Intel Corp. scored a public-relations coup during Sunday’s Super Bowl halftime extravaganza, showing off a product that wasn’t actually there and isn’t available for sale.

As singer Lady Gaga crooned a medley of patriotic songs, television viewers saw the Houston skyline behind her light up with twinkling stars that turned red and blue before taking the form of the Stars and Stripes spread across the sky.

The roving stars were a fleet of 300 Intel Shooting Star drones, remote-controlled fliers equipped with LED displays. Each lightweight, four-rotor copter can display any one of four billion colors at a time, including those of Old Glory as well the logo of Intel and sponsor PepsiCo Inc., which were shown in the sky as the halftime show ended.

SpaceX’s launch pad rocket explosion in September 2016 was a serious blow to the company’s reputation, but it soon got its project back on track with a faster-than-expected return to flight last month.

Clearly brimming with confidence, and determined as ever to move toward its ultimate goal of deep space exploration using reusable technology, SpaceX is about to ramp up its launch schedule to a level not seen in its seven-year history of rocket launches.

Making full use of its new launch pad at NASA’s Kennedy Space Center in Florida, Elon Musk’s space company is keen to undertake missions as often as twice a month.

The Smartest Ways to Use Your Smartphone in the Car (WSJ)

The best dashboard solutions are Apple’s CarPlay and Google’s Android Auto. Plug in your phone via USB and the core apps pop up on the car’s screen and can be controlled with familiar voice assistants. But they’re in only a limited number of car models. (The bigger, more-expensive Volvo XC90 is one of them—and this fall’s update of my XC60 will be, too.)

Most car interfaces are still stuck in the slow lane compared with the computers in our pockets. And so, like far too many drivers out there, I use my phone to get around.

But using voice control and other hands-free solutions is the lesser evil when compared with fiddling with a phone in your hands, lap or cup holder. That’s why it’s so important that you mount your phone where you won’t have to look down—yes, like an Uber driver.

The best part is the Google Assistant. Wake it by saying, “OK, Google,” then ask it to play George Michael, call Mom, repeat the last navigation prompt—even report who won the Super Bowl.

Starting today, the app will be home to Alexa—though Amazon’s assistant isn’t exactly great at riding shotgun yet. You can’t ask Alexa to navigate or play music but hey, I did order toothpaste and turn on my home office’s light while sitting in traffic. The best in-car use? Asking Alexa to play flash news briefings and Audible books on tape.

iPhone owners may want to consider a pricey solution like the Navdy, a “Top Gun”-like display that projects maps, caller ID and other info out onto the road ahead. Like my colleague, Geoffrey Fowler, I enjoyed it, but I’m not looking to drop $800 for a Band-Aid.