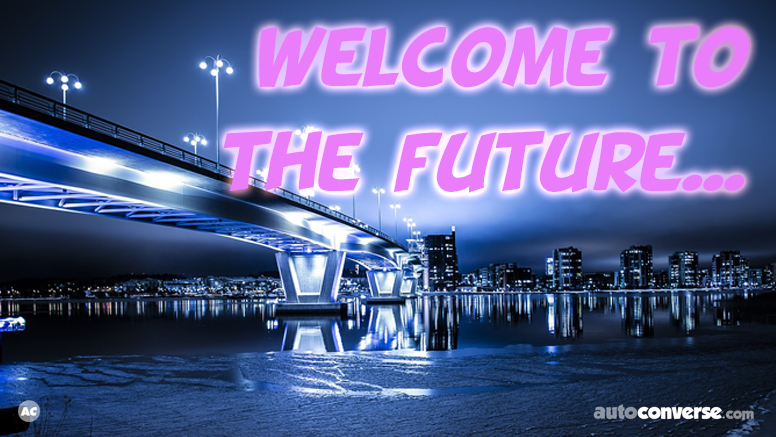 The past decade has a lot of technology dreamt of in science-fiction be developed for use in the real world. The flip phone style communicators and tablets of Star Trek have become today’s smartphones. Cars that offer self-driving options and on the fly navigation are now almost standard features. We are even becoming increasingly comfortable and familiar with the first generation of in-home service robots thanks to the likes of Roomba, Alexa and Siri.

With so many predictions coming to pass, it’s easy to lose sight of the ones that missed the mark.

We’ve brought together five predictions that never came into being. In some cases, the prediction was simply way off the mark but, in other cases, the explanation is a bit more complicated. 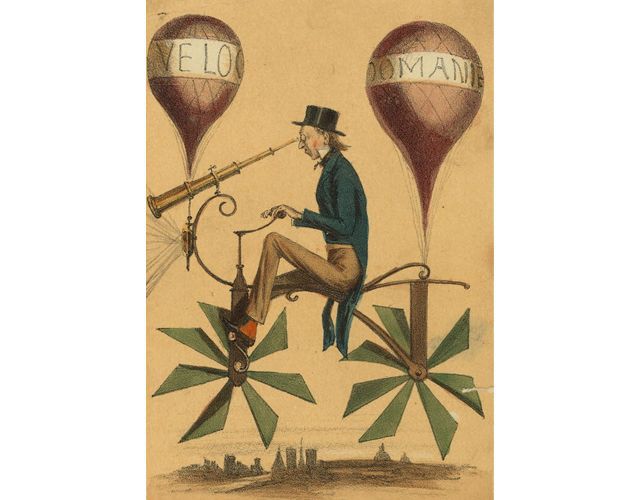 Long before people were dreaming about flying cars (more on that later) predictions focused on bicycles – a popular mode of personal transportation in the early 20th century. Famous mystic and literary celebrity Jules Bois was quoted in 1909 making a prediction about flying machines.

These vehicles would result in better transportation – and also empty cities. He saw a future with “a kind of flying bicycle will have been invented which will enable everybody to traverse the air at will, far above the earth. Hardly anyone will remain in the cities at night. They will be places of business only. People of every class will reside in the country or in garden towns at considerable distances from the populous centers.“

Why It Never Happened: When Bois made this prediction, bicycles seemed like the next big thing when it came to personal transport. While cars were beginning to get mass produced, the price, mechanics and reputation of them kept many people skeptical about how useful they would end up being. But, in the end, cars quickly outpaced every other option of personal transportation and the idea of flying bikes faded into the ether. On the flip side, you could easily argue that Bois effectively predicted the growth of suburbia around many large cities as a place for commuters to live in peace and simply travel to the city as needed. 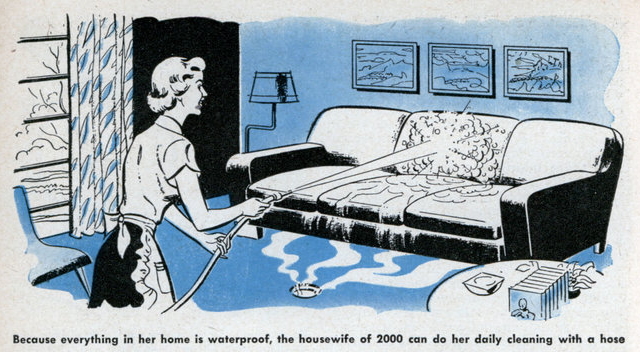 When it comes to predicting the future, many of us would probably think Popular Mechanics would be likely to get it right. But in the 1950s, Waldemar Kaempffert published an article full of predictions that probably seemed likely at the time but now sound like they’re straight out of the Twilight Zone.

In the article, Kaempffert illustrates his predictions for the future by creating a fictional town called Tottenville (population 100,000). He sets the scene by informing readers the town is illuminated by “electric ‘suns’ suspended from arms on steel towers 200 feet high and that “the town’s inhabitant live in cheaply made pre-fab housing built to last only a little more than 20 years.” Nobody in 2000 sees any sense in building a house that will last a century.

Moving into the home, he guides readers through the daily activities of Jane Dobson, the woman of the house. When it’s time for her to clean the house she simply “turns on the hose” he claims. “Why not? Furniture (upholstery included), rugs, draperies, unscratchable floors — all are made of synthetic fabric or waterproof plastic. After the water has run down a drain in the middle of the floor (later concealed by a rug of synthetic fiber) Jane turns on a blast of hot air and dries everything.”

When it’s time for Jane to feed her family, the job is equally easy thanks to modern inventions. She is able to take advantage of frozen foods which can be thawed and served immediately. “Even soup and milk are delivered in the form of frozen bricks,” he claimed and any meal – even one of several courses – can easily be prepared in under 30 minutes.

Why It Never Happened: At the time of this article, Waldemar Kaempffert was the science editor to The New York Times. Having said that, a lot of his predictions come across as absolutely bonkers today. No one wants to hose their house down and very few of us would be comfortable with a central drain in the middle of our home. Many of his predictions hinged on people in the year 2000 using disposable goods from plastic plates that we could put down the drain to hair removal creams that replace razors and scissors. While this may have sounded great in the early part of the century, the truth is that we now know relying too much on plastics and chemicals is actually a bad idea both in terms of resource allocation and ecology.

In the early 1950s the Lumberton, N.C. Robesonian ran an article about the future of television. At that time, television seemed like something almost magical. Pictures beamed from one part of the country which could be viewed in the privacy of your own home? It was a huge departure from what people were used to. After all, we’re talking about a society who had only just gotten used to the idea of dressing up to go to a movie instead of to a live play.

The article predicted that by the year 2000 “third-dimensional color television will be so commonplace and so simplified…that a small device will project pictures on the living room wall so realistic they will seem to be alive.” And, sure, today we’ve developed some pretty stunning HD options that could, arguably, be called 3-Dimensional.

But the prediction didn’t stop there. It went on to claim that with the changing scenery, “The room will automatically be filled with the aroma of the flower garden being shown on the screen.”

Smell-O-Vision, as the technology eventually became known, did actually see the light of day. Or, at least the light of a movie theater. In 1960, Hans Laube developed a working system that was used in a theater during a showing of the film Scent of Mystery. Another system, dubbed AromaRama, was developed by Charles Weiss and released three weeks earlier, with the film Behind the Great Wall.

Two different versions of the same technology released only weeks apart. The public was excited and the media was building on the anticipation, claiming the systems heralded a new age of cinematic experience with Time magazine calling it “fairly ingenious”.

The World-Telegram Sun wasted no time beating around the bush when they exclaimed, “You’ve got to breathe it to believe it – scented movies are here to stay!”

Why It Never Happened: In the end, both movies bombed and not even the novelty of a scent-track could save them. The smells came across as artificial according to some and there were problems with the intensity as well as challenges of theaters having to stock and swap out chemicals needed to accompany each picture. Besides, no one really wants to smell movies.

4. We All Become Mole People

Isaac Asimov is widely regarded as one of the most influential writers of science-fiction as well as being spot on with many of his predictions for the future. He was able to foresee everything from cheap and easily available birth control to synthetic meat but even idols get it wrong occasionally.

Asimov envisioned a world where people continued to withdraw from nature in favor of creating environments that were easier to control. “By 2014, electroluminescent panels will be in common use”, he stated in an article called Visit to the World’s Fair of 2014 (published in 1964). “Suburban houses underground, with easily controlled temperature, free from the vicissitudes of weather, with air cleaned and light controlled, should be fairly common.”

Living underground would mean that cooking and cleaning could be powered by geothermal energy and the devices could be fully automated, allowing all members of the family to focus not only daily domestics but higher pursuits. “Kitchen units will be devised that will prepare ‘automeals’ heating water and converting it to coffee” he claimed, “toasting bread, frying, poaching or scrambling eggs, grilling bacon, and so on. Breakfasts will be ‘ordered’ the night before to be ready by a specified hour the next morning.”

Why It Never Happened: The idea of humans living underground in order to use land for agricultural and manufacturing space while avoiding Mother Nature’s fickle temperatures does sound like something humans might consider but, in the end, it simply was never an option. Devising cities underground simply isn’t realistic in terms of engineering and cost-efficiency. Also, if people lived underground, we’d be likely to suffer from a host of chronic ailments since exposure to nature has been linked to all kinds of health benefits. Automated kitchens that take care of all the cooking or cleaning, however? Bring it on. 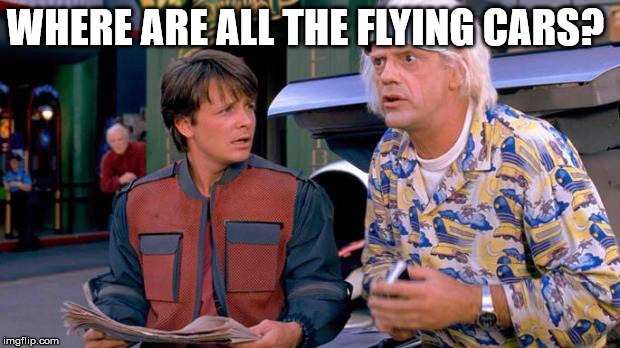 What list about failed predictions would be complete without mentioning flying cars? It’s probably the form of ‘future tech’ people joke about the most. After all, most of us grew up watching the Jetsons poot about in their jet car and then matured watching Marty McFly somehow hide his use of a flying time-traveling Delorean through a small town in the 1950s and during the Wild West. Not only that – it seems like it’s just ripe for the making. After all, we have cars and we have planes … what’s the problem?

But here we are, firmly stuck to the ground.

Why It Never Happened: The mechanics of mashing up a car with a plane might not be all that daunting but literally, every other part of the equation is. First, there’s the problem with infrastructure; How would we designate lanes or project traffic signals? Then there are the safety issues; If two flying cars crash in the sky, they’ll presumably fall to the ground crushing people and vehicles on the roadways. What about licenses? How would the testing be developed? How would parking work for vehicles that need extra clearance for takeoff?

Nevertheless, flying cars remain the Holy Grail when it comes to the future of transport. Even with the considerable challenges it presents, people continue to look for ways to make it happen. There are currently at least half a dozen developers working on creating viable air-to-road vehicles.