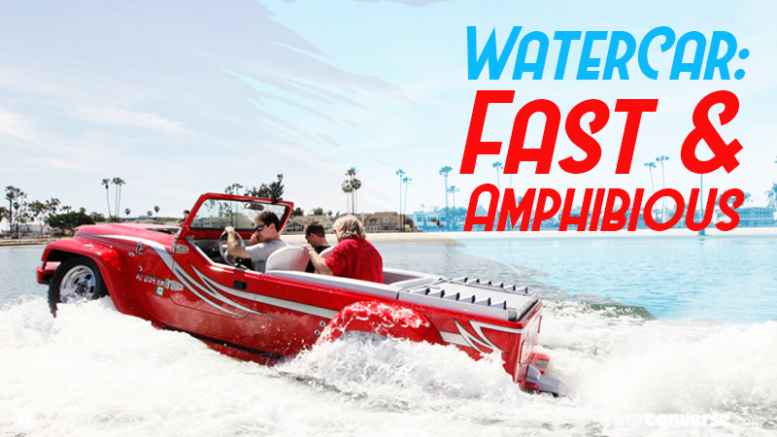 Maybe you want to drive down a beach and nip over to a sand bar.  Or possibly you’ve been thinking about off-roading it right into a river.  Or, heck, maybe you’re just worried about next year’s crop of tropical storms and flooding.  It’s really not difficult to think of reasons to want a WaterCar.

The WaterCar was launched in 1999 by Dave March who had been inspired by the Amphicar of the 1960s. He made it his mission to create a fast, reliable and fun amphibious car.

It took March and his team more than 10 years to develop three different prototypes. One of those original prototypes, dubbed the Python, was powered by a 450hp Chevrolet Corvette engine and could reach speeds of up to 127 mph on land and 60 mph in water.

Its impressive performance earned it a Guinness World Record in 2010, but its high production cost ruled it out as a commercial vehicle.

In 2011, the team went back to the drawing board to create something more reliable and with commercial potential. They used ideas and technology from the original prototypes to develop The Panther.

The Panther boasts a rear-mounted Honda Acura 3.7-liter engine (which can be upgraded to a Honda V6 motor), and a boat drive engine.  It has a Jeep body made with anti-corrosive materials whenever possible, meaning it can be used in salt water (though they are quick to advise a good rinse after use).  The WaterCar can go from land to sea in less than 15 seconds and also features hydraulic off-road suspension that retracts the wheels in less than eight seconds.

Currently, The Panther comes in a Turn-Key and Custom version with pricing starting at $140,000. Licensing and registering the vehicle can also be a bit of a problem, though the company is happy to advise who to contact and how best to register the vehicle. They are also pushing for legislation focused on “low production vehicle manufacturers.” If the legislation passes, WaterCar assures customers it “will make the registration of Complete Custom models much easier.”

In addition to their Panther model, the team has also released the WaterCar Fire Rescue version of their flagship car.  The special rescue vehicle isn’t just some Let’s Play Fireman plaything either.  The vehicle:

So whether you want to ride out to the islands for lunch but head to the beach for dinner or you’re ready to launch your own BayWatch team, WaterCar may be the vehicle you never knew you wanted.