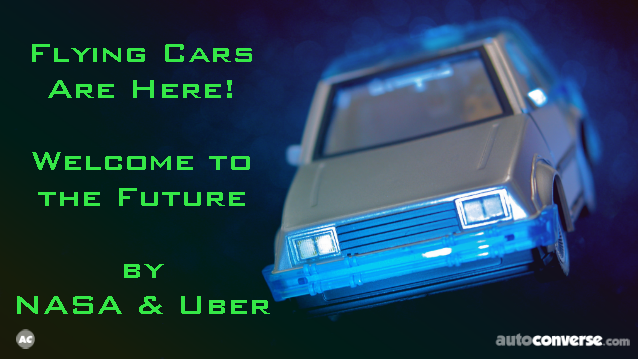 For a long time the idea of flying cars have been a part of society’s shared vision of future transportation. From the flying cars of the 1960s cartoon The Jetsons to Marty McFly’s plutonium enhanced Delorean, we’ve been waiting for flying cars pretty much since we started speculating about the future of transportation.

It should come as no real surprise, then, that the two companies behind many of the advancements in transportation and exploration are teaming up to (hopefully) make this dream a reality.

Uber and NASA have recently signed a Space Act Agreement that outlines the plan for “unmanned traffic management” which will include flying cars that operate on the same principles today’s unmanned drones use.

The deal marks the first partnership between the well-known start-up and a US federal agency. NASA, on the other hand, has a long history of working with private companies. The space-faring agency has worked with private companies in the past to design specific systems and components throughout their history. More recently, they’ve worked with Boeing and SpaceX on missions.

For the work with Uber, NASA plans to work with engineers and software developers to create a new department, called Uber Elevate. Uber and NASA have agreed that testing and development begins with creating a craft that can take off and land safely along with traffic management systems needed for the low flying aircraft.

Jeff Holden, the chief product officer at Uber said, “UberAir will be performing far more flights on a daily basis than it has ever been done before. Doing this safely and efficiently is going to require a foundational change in airspace management technologies.”

While flying cars and hovering taxis may still be within the realm of science fiction, Uber is already putting in the agreements that will give it a home in the real world. Earlier in 2017 it entered into agreements with manufacturers and real estate companies to plan out likely take-off and landing sites.