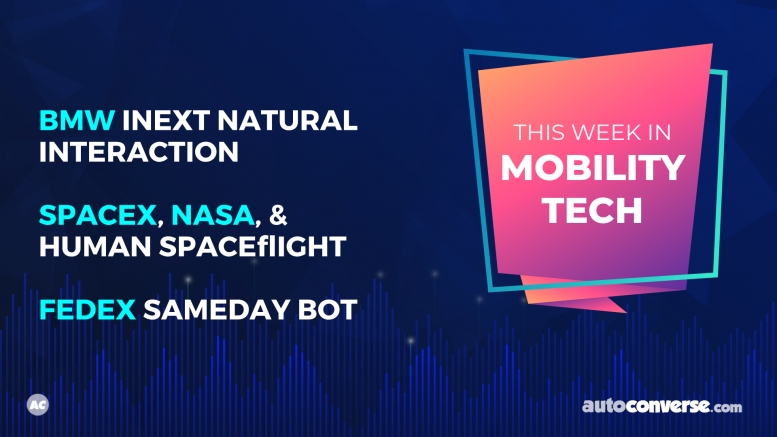 If the first few months are anything to go by, 2019 might easily become the Year of the Future.  NASA is teaming up with private company SpaceX to make commuting easier for astronauts. Automated bots are slated to start delivering everything from groceries to drywall. And BMW is unveiling an automobile you can flip off.

The video below features a preview of our conversation from earlier this month during the live weekly broadcast AC ON AIR. The preview highlights only a portion of the conversation, whereas the podcast featured in this post includes the complete conversation.

NASA and SpaceX Set Sights on the Return of Human Spaceflight

Longtime fans of AutoConverse know we have a special affinity for SpaceX and Tesla. They, like us, are fascinated by the future of mobility. Recently, SpaceX teamed up with NASA to conduct a test launch in order to send American astronauts to the International Space Station via NASA as opposed to routing them through the Russian space program, Roscosmos State Corporation.

The launch was a success and Elon Musk was visibly moved. Musk isn’t known for emotional displays but in the post-launch press conference he said, “I’m a little emotionally exhausted.”

Ever the pragmatist, he added, “It’s super-stressful, but it worked, so far. […] It’s been 17 years. We still haven’t launched anyone yet, but hopefully we will later this year.  So, that will definitely be the culmination of a long dream for a lot of people, me and other people at SpaceX, for sure. Can’t wait.”

With the bot, retailers will be able to accept orders from nearby customers and deliver them by bot directly to customers’ homes or businesses the same day. FedEx is collaborating with companies such as AutoZone, Lowe’s, Pizza Hut, Target, Walgreens and Walmart to help assess retailers’ autonomous delivery needs. On average, more than 60 percent of merchants’ customers live within three miles of a store location, demonstrating the opportunity for on-demand, hyper-local delivery.

Back on Earth, BMW has unveiled its newest future offering for an increasingly tech-hungry public.  The BMW group revealed the iNext at the Mobile World Congress 2019.

The iNext is slated to be the most interactive car we’ve seen to date.  The team at BMW says we’ll be able to interact via voice commands, hand gestures and even gaze recognition.

According to BMW’s official press release:

Just like in interpersonal dialogue, BMW Natural Interaction allows the driver to use their voice, gestures and gaze at the same time in various combinations to interact with their vehicle. The preferred mode of operation can be selected intuitively, according to the situation and context. Voice commands, gestures and the direction of gaze can be reliably detected by the vehicle, combined and the desired operation executed. This free, multimodal interaction is made possible by speech recognition, optimised sensor technology and context-sensitive analysis of gestures. Through precise detection of hand and finger movements, gesture direction – in addition to gesture type – is also registered for the first time in an extended interaction space that encompasses the driver’s entire operating environment. Spoken instructions are registered and processed using Natural Language Understanding. An intelligent learning algorithm, which is constantly being refined, combines and interprets the complex information so that the vehicle can respond accordingly. This creates a multimodal interactive experience geared towards the driver’s wishes.

Effectively, you’ll be able to talk to your car similar to how you would speak to a person. Does this mean we’re in for a future with MORE hand signals between drivers?

Also in the Podcast – Smart Mail

This Week in Mobility Tech is the opening segment of our live weekly broadcast AC ON AIR which is conducted each week by AutoConversion via live stream. In addition to this episode, this show included an extended conversation about a direct target print mail solution call AI Mail.

For more information about this program, follow this link.