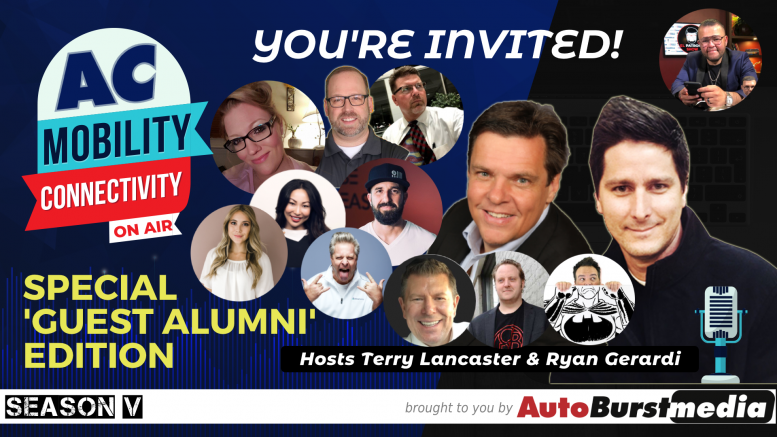 It’s been more than 20 months since the launch of the Mobility Tech & Connectivity Show, originally called AC ON AIR in February 2018. During this time we have featured more than 75 individual guests on the live weekly webcast, with nearly as many episodes.

Which is why for our final episode of the season, we invited those Special Guest Alumni to participate in this year-end season finale.

Season 5 got started in August with our first official Co-Host – Terry Lancaster. This is also when we formally converted the name to what it is now. Season 3 began at the start of 2019.

The purpose of the show is to explore people, ideas, and technologies that influence HOW we are connected and the WAY we get around. It features news, analysis, and opinions with a relaxed but professional twist. The show plate for this episode features some of the faces of people who participated, but certainly not all.

For this special episode, five of those special guest alumni were able to make the show and appear on video: Amanda Ryan, Ian  Coburn, Mike Phillips, Steve Roessler,  and Terry Lancaster, plus a few others who were able to pop in and out during the webcast. Enjoy the show!

According to this Reddit report, Tesla is now the third most valuable car company in the world. Valued at just more than $63B, Tesla, unlike most other auto makers, does not contain any other brands or subsidiaries. Daimler was in the number 3 spot and just under $60B, follow by BMW, General Motors, and Honda – all above $50B. At number one is Toyota with more than a $200B market cap, followed by Volkswagen at just under $100B.

After months of speculation and a corporate lockdown that just almost, very nearly kept its appearance a secret, the 2020 Ford Mustang Mach-E all-electric SUV emerged today at a gala in Los Angeles ahead of this week’s auto show. It’s the first time Ford has put the Mustang badge on anything besides a two-door pony car since its debut in 1964. Set to go on sale in Fall 2020, the Mach-E will be offered with both rear- and all-wheel drive in several trims. A GT Performance variant that’ll get from zero to 60 in the mid threes will arrive in Spring 2021.

The company’s subsidiary, Jump, must appeal the decision by Friday or leave the city, the Transportation Department told the company in a letter last week. For now, customers can still rent the vivid red scooters and electric bikes through the Jump app.

In response, Uber threatened in a letter to sue the city over the “patently unfair and improper” suspension. The letter also questioned the validity of the “eleventh-hour administrative review process” that the city created last month.

“Every other company that is permitted in Los Angeles is following the rules,” said Transportation Department spokeswoman Connie Llanos. “We look forward to being able to work with Uber on getting them into compliance.”

The Spectacular Rise and Fall of WeWork

In less than one year, WeWork went from having a $47 billion valuation and being the darling of the venture capital world to needing an $8 billion infusion to avoid running out of money. This is the story of how we got here.